Start a Wiki
OS
Loading...
During "The Fremennik Isles"Post-questYoung Mawnis 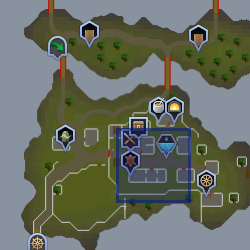 Mawnis Burowgar is the current ruler of Neitiznot, a small island within a volcanic archipelago north-west of Rellekka. Burowagar is a direct descendent of King Neitiznot, the Fremennik who established Neitiznot some four generations ago. Mawnis, although technically a king, is referred to in the game as a burgher.

Mawnis is the cousin of King Gjuki Sorvott IV, ruler of the neighbouring island of Jatizso and direct descendent of its founder, King Jatizso. As a result, the two harbour a bitter rivalry that has resulted in an armed conflict between the two. He also has a sister, Freygerd, who moved to Jatizso to be with her husband Nial Swiftfling. He also had a wife and at least two sons.[1]

After completing The Fremennik Isles quest, players will be rewarded with Mawnis's helm of Neitiznot. Should they lose it, they can rebuy it for 50,000 coins.

Mawnis Burowgar is the fifth ruler of Neitiznot, and has ruled it well for many years. Unlike Jatizso, the fertile ground and relatively good climate of Neitiznot have allowed it to flourish for centuries.

Until recently, Mawnis was much like his cousin: bitter, violent, and generally unwise as a leader.[2] However, less than a year ago, a war-like band of ice trolls arrived on one of the archipelago's northernmost islands, and have since pushed their way south. Whilst Jatizso's militia was prepared for the attacks, Neitiznot's Honour Guard were not. Under the cover of darkness, a number of trolls managed to pass Neitiznot's borders. They mercilessly pillaged the western half of the island, burning down a number of homes and killing anyone they encountered.[3] Although they were eventually forced out of Neitiznot by the Guard, the island suffered heavy casualties. Amongst those killed were Mawnis' wife and young son.[1]

Since this time, Mawnis has changed, softened by the murder of his family.[1] Deciding that the rivalry between the two islands must be temporarily put aside, Mawnis and Sorvott agreed to a grudging truce so that they could focus on protecting themselves from the trolls. His kindness has not been lost upon his subjects, who today are happy and more supportive of him.

During The Fremennik Isles quest, the adventurer helps Mawnis remove the threat of the ice trolls by killing their leader.

During Glorious Memories, he refuses to attend the birthday feast of Brundt the Chieftain as several years previously he had been part of a group including the chieftain, Prince Vargas, his brother-in-law Nial and Asleif Hamalsdotter. They had gone in search of a prophecy tablet. During the search, they came across a gnoeals who turned Nial into a yeti. Despite Mawnis's protest, they decided to flee and ended up outside the Fishing Guild, the tablet missing. The young burgher, chieftain and prince all believed one of the others had stolen the tablet, causing them to nurse grudges against each other for fifteen years. He helps the adventurer locate the lair where Nial was turned. After Nial is laid to rest, Freygerd promises to return to Neitiznot, and Mawnis agrees to attend the feast, where he, Brundt and Vargas make amends, believing the tablet stolen by a mysterious mage.

Retrieved from "https://runescape.fandom.com/wiki/Mawnis_Burowgar?oldid=24920710"
Community content is available under CC-BY-SA unless otherwise noted.