Maximum hit is a term used to describe the highest amount of damage that can be inflicted in a single hitsplat.

The maximum hit allowable is 32,000. Damage in RuneScape is stored as a short type integer, giving a maximum value of 32,767; however, round numbers are preferred, so the last 3 digits are always truncated. The acidic spider summoned by Araxxor is an example of a creature that can hit this limit.

Normally, a player's maximum hit is 10,000. If this happens to be a critical hit, the cap increases to 12,000. There are exceptions to this, however.

Erethdor's grimoire increases the max hit of critical hits to 15,000 while it is active.

The Constitution abilities Shatter and Onslaught can deal a maximum of 30,000 damage. Tuska's Wrath can deal a maximum hit of 15,000 with 120 Slayer if it is used against a monster that is currently a slayer assignment, although there are certain monsters immune to it.

The boogie bow could hit a maximum of 1,000,000 on the Party Demon, although this was merely an exaggeration to commemorate the 200,000,000 accounts made in RuneScape.

The maximum magic hit is 20,000. This is performed by using Sunshine/Metamorphosis followed by Omnipower with level 80 or higher mage weapons equipped. Auto-casting Blood Blitz (or any of the higher level Ancient Magic spells) against a Muspah allows the Omnipower damage cap of 12,000 to be exceeded.

After touching the Stone of Jas during Dishonour among Thieves, the player is capable of dealing up to approximately 25,000 damage to the various apparitions with any combat style.

Prior to the Evolution of Combat, the maximum hit was 3,000 on an enhanced ice titan or ice demon during Ritual of the Mahjarrat.

The ruby bolts (e) have a special effect that removes 20% of the opponent's current life points (at the cost of 10% of the player's own health). Enhanced ice titans and ice demons both have 15,000 life points, and 20% of that is 3,000. Note that the special effect of the bolts is not affected by equipment bonuses and Ranged level.

Prior to this, the maximum hit was 2,000 on an Avatar of Destruction or Avatar of Creation from Soul Wars (10,000 LP), or the Decaying avatar during Nomad's Requiem.

The maximum hit of a monster is the highest amount of damage that a monster will inflict for a given attack style. If a player is hit by this monster, the player will receive damage up to and including this amount. There are certain ways to reduce the amount of damage through protection, such as prayer.

The lunar spell "Monster Examine" may be used to identify the max melee hit of a monster. If a monster does not use melee attacks, and only attacks with ranged or magic (such as Dark Wizards), then it will display the monster's max hit with the attack style it uses. Monsters with more than one attack style (ex. melee and magic), may have two different maximum hit levels, one for each attack style. This information is useful for players that can protect from a certain style of attack with prayer.

Monsters have a certain fighting style too, making them more or less effective versus what you are wearing and using during combat.

The current highest monster maximum hit against players is performed by Nex: Angel of Death, who can deal 75,000 damage to a player with her True Blood Sacrifice after three blood reavers with maximum life points reach her.

The current highest monster max hit of a monster on another monster occurs in the final cutscene of Ritual of the Mahjarrat, where Azzanadra damages Lucien for 18,899 and 9001 damage while infused with the power of Zaros. Outside of cutscenes, Lucien is capable of hitting the damage cap of 10,000 repeatedly on Wahisietel. During the Battle of Lumbridge, Saradominist colossi and Zamorakian siege beasts were able to hit 32,000 on each other, although they are no longer in-game.

During Fate of the Gods, after surviving Mah's nightmare, she will destroy every muspah in the arena, potentially dealing 20,000 damage to them.

Prior to the Evolution of Combat, the highest monster max hit against a player was 1,757, from Nomad against a player in full Torva armour with 99 Constitution using his Disintegrate attack (Pernix or Virtus would have soaked some damage). The highest monster regular hit however, was TokHaar-Jad, who had a max of 1,014 with all three sides of the combat triangle. During the Ritual of the Mahjarrat quest, Lucien could also be seen regularly hitting over 1,500 while fighting with Wahisietel. The Sea troll queen managed to deal 254 (2540) damage to the Wise Old Man, although this later became 2345. Additionally, Jadinko guards would instantly kill any Mutated jadinko baby that hatched for 1270 damage. 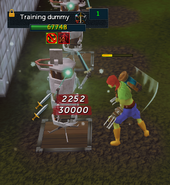 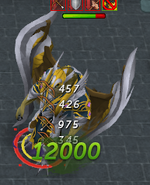 Azzanadra using the power of Zaros to hit Lucien for 18,899 damage

The old style for a hitsplat, with damage number still following the Legacy system
Click an image to enlarge
Retrieved from "https://runescape.fandom.com/wiki/Maximum_hit?oldid=23299202"
Community content is available under CC-BY-SA unless otherwise noted.