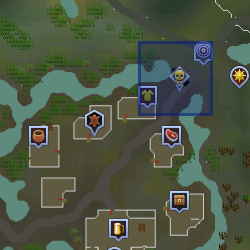 Mazchna (pronounced Mash-ner) is a low-level Slayer master located in north-eastern Canifis, very near the Canifis lodestone. He will give slayer assignments to any player with a combat level of 20 or above. Mazchna is noted for usually giving assignments close to his area.

Mazchna is a demon by race; he is the only known demon Slayer Master, apart from Achtryn, his temporary replacement during the quest While Guthix Sleeps. Mazchna became very skilled in combat and Slayer, and eventually became a Slayer master. Mazchna chased away all the other demons in Morytania, gaining a Slayer master monopoly in the area. Mazchna, unlike some other demons, strives to be good.

The following takes place during While Guthix Sleeps.

Mazchna fought in the Skirmish at the Chaos Temple; he is one of a band of eight heroes who attempts to save the player from Lucien after the player's identity is compromised. It is seen during the battle that Mazchna has a combat level of 197. Mazchna is one of only two among them (along with Harrallak Menarous) to survive the ensuing battle. Because he, like the other survivor, was fighting the undead that Lucien raised rather than Lucien himself armed with the powerful Staff of Armadyl, Lucien did not cast his spell on them. All six who attacked Lucien directly perished. In any event, Mazchna is not invulnerable and appeared to be seriously injured during the battle. Immediately after the battle, he teleported away to his normal spot in Canifis.

Players can receive Slayer points for completing Slayer tasks, based on how many tasks players have accomplished in a row. Completion of a task assigned by Mazchna will grant you:

This means that if using Mazchna over the long term, an average of 2.5 points will be granted per task.

After the release of Smoking Kills, Mazchna became one of the most popular slayer masters, even among higher-level players in pursuit of Slayer points. Because Mazchna's tasks are easy to complete by high-level players, a player can accomplish the first 9 tasks with ease and then use a higher level master like Kuradal or Duradel for tasks which are a multiple of ten, thereby gaining easy Slayer points.

Many slayer monsters have numerous variants of the monster assigned. Please check the monster's page for more specific information about the different variants.

The three monsters you have to fight are a ravenous snail (level 49) at ring BKR, a ravenous ghoul (level 70) at ring CKS, and a ravenous vampyre (level 91) at ring ALQ. The fairy rings can be done in any order.

The player does not have to finish the conversation with Mazchna after each kill, they can go to the next fairy ring immediately after killing one monster.

For Mazchna, assuming all possible assignments are available,