Mega Duck is a mallard who has received too many breadcrumbs, becoming massive in the process. He is created when a drake in Falador Park or Lumbridge is fed 21 breadcrumbs within 20 seconds.

By attacking him, he can be lured anywhere in the game that is not blocked by physical boundaries, and if brought to the ocean by Mobilising Armies, he swims off into the sunset with another gigantic duck, Mrs Duck. Luring Mega Duck to Mrs Duck also gives a 1 in 20 chance of receiving the Mega ducklings pet.[1]

He has an extremely high number of life points and uses weak melee attacks. As his life points are reduced, his Defence rises significantly, and at under 1,000 LP, all attacks will deal one point of damage. 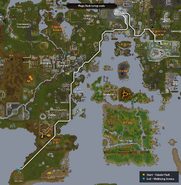 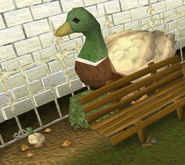 Mega Duck in comparison to a normal drake 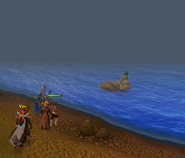 Mega Duck swims off with his new mate, Mrs Duck.
Click an image to enlarge

Retrieved from "https://runescape.fandom.com/wiki/Mega_Duck?oldid=23928642"
Community content is available under CC-BY-SA unless otherwise noted.