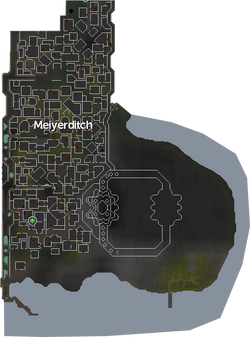 Meiyerditch (pronounced "My-err-ditch"[1]) is Morytania's largest city and part of the Sanguinesti Region. Meiyerditch is Gielinor's second largest known city after Prifddinas, and the largest in terms of the number of buildings in the city.

Meiyerditch was once a prosperous city inhabited by humans and Icyene. However, for Lord Lowerniel Drakan's hand in the overthrow of Zaros, the now-god Zamorak permitted Drakan to attack Hallowvale. The battle was tough and the Icyene had special powers that were harmful to vampyres, but he ultimately won by kidnapping Ascertes, the husband of Queen Efaritay. Lord Drakan then forced Efaritay to surrender, but not before she brought her son, Safalaan, to safety, who became the primary target of one of Drakan's most dangerous vampyres, Vanstrom Klause. His power soon extended over all of Hallowvale until eventually the entire region belonged to him. The Icyene powers had a legacy though, known as the Blisterwood Tree. Due to its morphing nature, the vampyres' attack-predicting mind trick does not work and as such it proves a formidable weapon against them. Unable to dispose of the tree, Lowerniel simply had a highly secured arboretum built around it.

Taking Meiyerditch as his own, the city, became a ghetto, divided into sectors. Ruling from Castle Drakan in Darkmeyer, which was split off from Meiyerditch, his power over the area is nearly absolute. The renamed Meiyerditch soon became a storing area for captured humans (no Icyene were left), who today are farmed like cattle for blood. Many tried to escape, such as Lantania and Sialathin, but very few managed. Study of haemalchemy in a secret laboratory, which was intended to find out how to farm more blood, accidentally revealed that blood is not necessary for the vampyres' survival, a discovery that led to a shutdown of the laboratory and high secrecy amongst the involved vampyres. A lone rebel resistance group, The Myreque, continue to fight against Drakan from within the city itself. As they give hope to the city's people, eradicating them has become a high priority of the House of Drakan.

The laboratory, despite being sealed off, has been discovered by the Myreque. Despite the experimentation having ended, evidence of its horrors still remains in the underground network. Many mutilated human corpses can still be found locked in restraining devices even today.

Eventually, a Myreque recruit killed Lord Drakan, resulting in his sister Vanescula taking place as she killed Ranis during the events of The Branches of Darkmeyer. Vanescula has taken great strides to ensure that the city is fit for her rule, even attempting to attack Misthalin in order to acquire more civilians to tithe on. However, the same recruit stops her invasion plans, and she grudgingly agrees to make an alliance with Varrock. According to Veliaf Hurtz, who came as soon as he heard his friend Safalaan was still alive, he came back to the city to act as his adviser. The new leaders have been working hard to fix up the ghettos, though it is likely to take years before the results can be seen.

Since its taking, Meiyerditch has been changed into an unrecognisable ghetto. The city is entirely isolated by massive walls on its north, east, and west side, and the South-eastern Sea at its southern end effectively boxes the city in. The Vyrewatch, who rule the city, are capable of flight, and as a result, there is no gateway into the ghetto. The Vyrewatch themselves serve to further control the masses, killing and feeding at will.

Conditions within Meiyerditch are terrible. The city is overcrowded, with humans crowded into small wooden apartments that have long since lost walls and roofs to rot. Food is rare, and many are forced to eat rats to survive. Clothing and other basic necessities are also in short supply. All throughout the city, dying citizens can be seen huddled against walls and in the dark confines of alleys.

The ghetto is divided into six sectors, each of which has a number of residents barricaded within. The inhabitants of these sectors pay forced blood tithes on a rotational basis, so as to prevent the large majority from dying of blood loss. While this does work to some extent, many citizens do not survive the tithes.

Beneath Meiyerditch is the massive Meiyerditch mine, where slave miners are made to work for days on end to mine Daeyalt ore. The vampyres ship the mined ore to a massive underground factory, where the daeyalt ore is being used to turn humans into vampyres. One Morytanian legend says that even further beneath the city a massive inferno burns, from which Hellish creatures are spawned. Another says the ore is used in a massive city beneath Meiyerditch. However, there is no evidence to support this.

There are 4 ways to get to Meiyerditch:

If a player plans to come to this city the player must begin the Darkness of Hallowvale quest. The first thing any adventurer will notice is that Meiyerditch is patrolled by the Vyrewatch. They are invincible unless attacked with an Ivandis flail, so it is not advised to attack them. If they ask for a blood tithe, it is possible to either choose to give the tithe or distract them. Failing to distract the Vyrewatch (or choosing to pay the blood tithe) will inflict 60 life points. After some time into the Darkness of Hallowvale quest the player will have another option of being sent to the mines to mine 15 Daeyalt ore instead of taking a blood tithe, which brings a player fairly close to The Myreque hideout without doing the otherwise required agility course. When a large part of the Legacy of Seergaze quest is completed, players can then attack vyrewatches using the Ivandis flail. If the vyrewatch has "taken interest" in a player, the player can still attack the vyrewatch by clicking attack on the vyrewatch itself. Another player can attack the vyrewatch, allowing the first player to escape untithed.

Once into the main part of the city the player will encounter Meiyerditch's citizens, children, stray dogs, and cats. Also to greet the player are level 45 Vampyre juveniles, but they are non-aggressive. There are also Vampyre juvinates guarding the large building (so far inaccessible) on the eastern border of south Meiyerditch.

Meiyerditch is one of the largest cities in RuneScape, and many players find it difficult to navigate through the city due to all the ruination and the barricades. Some things that will help players are:

The city is in ruin, which makes for good moderate level Agility and Strength training. Meiyerditch is essentially a highly populated Agility Course, if the player is doing Darkness of Hallowvale and is at the agility section of navigating through the city.

The Daeyalt ore mines may be accessed either through attracting a Vyrewatch's attention and ask to be sent to the mines, or going to the north-eastern-most part of the city. These ores may be mined giving 17 experience each. However, the ores cannot be sold, so this has more to do with training than moneymaking.

Meiyerditch has one lone shop down in the south-western part of the town. Trader Sven's General Store sells Vyrewatch clothing and Citizen clothing; costing 1950 coins and 18 coins, respectively. Both sets allow the player to blend in, and be spotted less by the vyrewatch.

After reaching a certain point in Legacy of Seergaze, a furnace becomes available north of the Myreque Hideout. It is almost never used, as it is far away from any ore deposits or banks.

Meiyerditch is also where the player does a large part of Darkness of Hallowvale. The Myreque (Sanguinesti Order) base is located in the north section of the city. It can be reached fastest by being sent to the mines, and then running south.

After Legacy of Seergaze quest, Meiyerditch can be visited to kill Vyrewatches, as those in the woods east to Burgh de Rott are aggressive and mixed with Vampyre juveniles and Vampyre juvinates, making it harder to pick the Vyrewatch to kill.

Beneath Meiyerditch is the Meiyerditch Dungeon, which was once a vampyre research laboratory. Upon completion of Legacy of Seergaze, players may access it in its entirety, including a small slayer dungeon, the Blood altar, and a destroyed laboratory. A shortcut to the original Myreque Hideout tunnels also exists. By travelling down a long tunnel, players can reach the tomb of Ivandis Seergaze, which in turn leads to the old Myreque tunnels. These lead out into either Canifis or The Hollows. The Dungeon contains Bloodveld, Mutated bloodveld, and Skeletal hands.

In the In Aid of the Myreque quest, the player finds three interesting books in the hidden library at Paterdomus. One of them (Modern day Morytania) tells you that there is in fact a second, and perhaps larger, city in the Sanguinesti region that is not in ruins. Darkmeyer may be where Drakan is lurking, because he is not mentioned by any important people of Meiyerditch. During Branches of Darkmeyer, the city is visited.

In the eastern portion of Meiyerditch, nearly off the world map lies Efaritay's old palace that has been abandoned and ruined for some time. Lord Drakan ambushed the palace by creating a tunnel from an area now known as the Icyene graveyard successfully overthrowing Queen Efaritay and ruling over the lands of Morytania.

It is possible to enter the courtyard (the fenced area) without difficulty, but it has a yellow door that is unopenable, and when examined it says, "What is behind... the scary door?" The player cannot see inside this castle, even if they move the screen.

Players with Ava's alerter may find a crate containing an elite clue scroll near an indent along the eastern wall of Meiyerditch. The spot is near a sitting child, and a spade is needed to dig it up. This is one of four possible locations where a hidden elite clue scroll can be found: the others are Lunar Isle, Isafdar, and the Iceberg. Players should note that they can obtain only one of these clue scrolls, and the place varies from player to player.

Ravaged houses because of the glitch.

Music unlocked in this location: