Melzar's Maze is a large, three-story building with a basement, and is located north-west of Rimmington. It is the home of Melzar the Mad, and the location of a map piece required for the Dragon Slayer quest. The bookshelves in the maze contain Melzar's notes, which reveal bits of information on Melzar's experiments and descent into madness.

Only one door leads players to the next floor; the rest will send them back to the first floor. When a key is used with a door, it will disappear. Because of this, it is recommended that players carry two of each key, so that if they make a mistake, they can go back through the door, get another key, and go into the correct door. 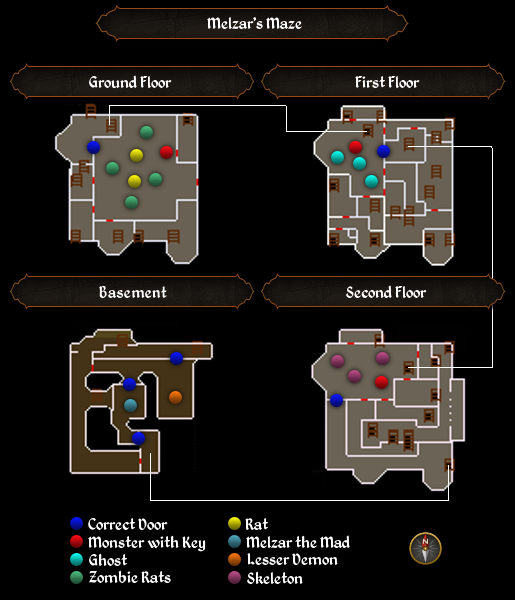 The ground floor is where players enter the building. On this floor are red doors, level 2 Zombie rats, and level 1 rats. The north-east room contains an exit that will take players to a hall and then back outside on the building's east side.

One of the zombie rats holds a red key; the correct one spawns near the far right red door, and it is a small one. It is also the only small rat that has a long, curled tail, rather than a short stubby tail. When they have a red key, they must open the northernmost red door on the west side. They can then climb the ladder and go the next room.

In June 2007, it was no longer possible to progress to the next floor if the quest was complete, as an update made the rat with the red key non-attackable. This update was reversed in July 2007, making it possible to use the area again.

On the first floor, players will find level 12 Ghosts, who were most likely victims of Elvarg. Players may talk to them if they wear an amulet of ghostspeak, obtained from The Restless Ghost quest.

Kill the hooded ghost that is not wearing a cloak, it will drop the orange key needed to open the second door from the ladder on the eastern wall. Proceed up this ladder to appear on the second floor.

On the second floor, players will have to fight level 12 skeletons. The skeleton with the yellow key is the only one with a round shield. When players have killed this skeleton and obtained the key, they must then open the south western yellow door and continue down the hallway to the ladder. They will then climb down various ladders until they end up in the basement, the toughest part of the maze.

Players must kill the zombies until they receive a blue key. The zombies look identical, so both of them may have to be killed. Once the key is obtained, use it to open the blue door and continue the maze.

Behind the blue door is Melzar the Mad, a demented level 39 wizard. When players attack him, he will use melee as well as magic attacks. He will also sometimes make cabbages pop up nearby. In this room, the brown door leads to an exit; it is the magenta door that leads to the last opponent in Melzar's Maze. Once players have defeated Melzar, he will drop the magenta key.

Behind the magenta door is a powerful lesser demon, a fearsome level 56 foe. If using melee, players must be well prepared for this opponent, which brings up the topic of what weapon to use. Silverlight is a good choice for players with lower attack levels. The demon's main weakness is arrows, so ranged weapons would be more effective. The lesser demon uses magic and can hit up to 160. The Protect from Magic prayer is helpful to lower the damage taken from the lesser demon's attacks.

If players need to escape, there is a brown escape door down the hallway they can use to get out of the building. Players may also choose to teleport out of the maze. When they have killed the demon, players can then open the green door with the green key that is dropped by the demon and claim the map piece from the chest just outside the door. Once they have the map piece, they can then climb the ladder back to the ground floor and leave if they wish, or they can stay in the maze to train.

Retrieved from "https://runescape.fandom.com/wiki/Melzar%27s_Maze?oldid=22749747"
Community content is available under CC-BY-SA unless otherwise noted.