The Menagerie is a room in a player-owned house where players can let their pets live. Building a Menagerie requires level 37 Construction and 30,000 coins. Players may only build one, but players can move it, which costs the same amount as it would to build it. The move option is triggered by trying to build a second Menagerie. If moving a menagerie with pets still stored in the pet house, the pets will not be lost. A menagerie can house a maximum of three, six, fifteen, or twenty-five pets, depending upon what kind of pet feeders and pet houses are built there.

The Menagerie can only be built on the ground level.

All types of pets can be kept in Menageries and can roam around players' houses. Players can put them in the shelter and they will run around the house. Pets must be fully grown to be placed in a shelter. Players can change the basic look of the Menagerie by changing the habitat. Players can also recharge their Summoning points if they've built an obelisk in the available hotspot.

There are 4 types of hotspots available:

The small obelisk will change its glow depending on what the menagerie theme is. E.g. Volcanic habitat it will have an orange glow rather than the green glow of a garden habitat.

The pet feeder is designed to provide as much food as the pets need, so the player does not need to worry that any pets in their menagerie will go wandering off. It also can be used to feed any hungry pets in the inventory, as well as the one following the player, all at the same time.

It is built in upgrades - one must build the previous feeder before a higher level one can be build.

The pet feeder is highly useful for a cheap way to feed the player's pets, especially higher level pets such as baby dragon which require expensive food to feed.

The pet house is used for storing pets in one's house, even when logged out. If the pets are left here, they will walk around the house. The pet house (as well as the pet feeder) is built in upgrades - one must build the previous model before the next higher model can be build. An equivalent pet feeder is also required before the pet house will hold its full complement of pets.

All Summoning-related fully grown pets, plus rune guardians and cats can live here. Baby pets cannot live in the house. Some pets which do not have a grown version, like the phoenix egglings and the Broav, can be stored in the pet house.

The Volcanic habitat also requires the TokTz-Ket-Dill quest to be partially complete in order to obtain the untradeable stone slabs.

Building all the highest level items will take 8 oak planks, 8 teak planks, 12 mahogany planks, 1 marble block, 1 gold leaf, 1 magic stone, 1000 spirit shards and 100 lava runes, with a value on the GE of 1,572,999 coins. It will also require 1 bagged dead tree, 5 stone slabs and 10 of each colour charm, which are all untradeable (information on how to get these can be found on the item pages).

Small obelisk in a POH 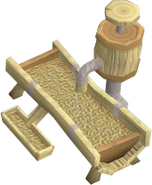 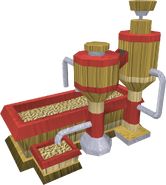 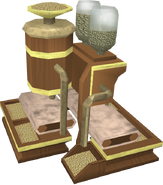 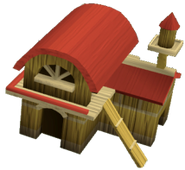 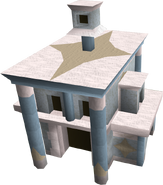 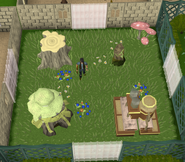 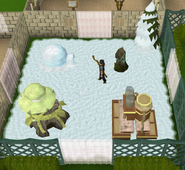 Retrieved from "https://runescape.fandom.com/wiki/Menagerie?oldid=21486478"
Community content is available under CC-BY-SA unless otherwise noted.