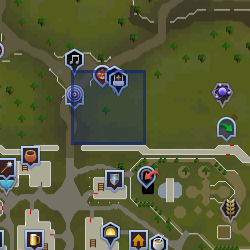 The Mercenary ranger was a mercenary that fought trolls north of Falador. He fought alongside the Mercenary warrior and the Mercenary mage. He could be seen wearing full Armadyl armour and mercenary's gloves, and wielding a Dark bow, as well as the aura "sharpshooter". His quiver was filled with 900 Dragon arrows (p++). His arrows remained at a fixed amount of 900. He could also be seen doing the Breathe Fire emote. His combat level was 113.

Retrieved from "https://runescape.fandom.com/wiki/Mercenary_ranger?oldid=24564564"
Community content is available under CC-BY-SA unless otherwise noted.