What kind of merchant would set up his stall here? 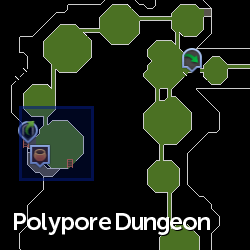 The Merchant (previously known as strange voice) is found on the first level of Polypore Dungeon near the entrance.

He owns and operates Polypore Dungeon Supplies, where he sells players items that can be of use in the dungeon, such as jugs. He also sells mycelium web armour, which is magic armour that can be modified with drops from the dungeon to create fungal armour, grifolic armour, and ganodermic armour.

The merchant can also be used to store certain Polypore-specific items by right-clicking and selecting Exchange. Players can store:

When asked about himself, the Merchant tells a short story of how he used to "live in a little house in a warm land", with his "Darling". He then goes on to tell how his Darling died of some illness, and then he wandered off and presumably may have gone somewhat insane, possibly due to spending so much time alone. Eventually he found "Ladyship", or the Ramokee Skinweaver, for whom he now works and reveres, speaking of her like a queen.

Retrieved from "https://runescape.fandom.com/wiki/Merchant_(Polypore_Dungeon)?oldid=24563077"
Community content is available under CC-BY-SA unless otherwise noted.