Mermaids are an aquatic humanoid race that frequent the seas of Gielinor.

They are native to these isles. Their cousins, the sirens are also native to this archipelago.

The species was first seen in-game in the Northern Sea, where there are only three known individuals: Tentacle, Urchin, and Anemone. These mermaids use the Thalassus as protection from humans and enjoy feeding humans to the Thalassus. The three mermaids live in the Blue Spiral.

There are no mermaids known to be native to the Southern Sea. Remora, the siren whose song starts the Songs from the Depths quest, came to the southern sea when escaping from her abusive stepsisters.

Mermaids have the upper body of a female humanoid and the tail of a fish. Mermaids vary greatly in appearance and can display fin shapes, length and scale and flipper colouring of other sea creatures like Anemone's tiger shark skin and sharp fins and Tentacle's vivid colouring. Even sisters can appear completely different. Mermaids can also display fish-like characteristics on their human half such as spines, tentacles or fins instead of fingers.

According to The Mermaids and The Dragon, mermaids have the ability to control water. This is shown when the mermaids manipulated the currents to carry their prey to their home and when they surrounded themselves in water in order to protect themselves against the Queen Black Dragon. They are also natural born hunters, able to easily track the scent of one of their sisters, even on land. They track using their gills. By opening their gills and letting the water flow in, they detected Remora's trail. They can even sense the emotions of the hunted as the mermaids commented that Remora's desperation only thickened her trail. The mermaids' gills also flap when danger is present.

They are also able to transform their tail fins into legs to enable movement on dry land. Mermaids can also form bonds with sea creatures. This is shown with the three mermaids who use the Thalassus as protection. Mermaids do not get their powers until a certain age. Fifteen is a common age for their powers to awaken.

Some mermaids also have a magical voice that can put any man or monster that hears it into a trance. These ones are called sirens, and the only known sirens are Remora and seasinger Umi. The siren song can be destructive as it causes men to become besotted with the singing siren and fight to the death over her or swim across oceans to be closer to her. 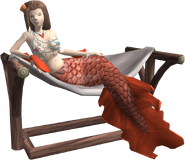