If you destroy this item you cannot reclaim it. You will have to win more trinkets from Treasure Hunter.

Magical trinkets that you can set up to give you Slayer XP, note items and land a finishing blow when fighting metallic dragons.

Metallic dragon trinkets are a neck slot item that, when worn or in the inventory, pick up and note dragon bones and bars from bronze, iron, steel, mithril, adamant and rune dragons, as well as offer teleports to places where these dragons are located. They also provide Slayer experience on kills even outside Slayer assignments and have a 5% chance per hit of instantly killing a metal dragon when its health is above 80%.

The bonecrusher upgrade, when configured to pick up bones, will preempt the metallic dragon trinkets, and you will receive unnoted bones in your inventory without consuming the trinkets. 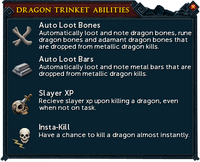 The functions of metallic dragon trinkets can be toggled on or off in an interface which is opened by using the right-click "toggle" option on the trinkets. Different numbers of trinkets are consumed, depending on which benefits are used and the type of metallic dragon killed.

The following table lists the Slayer experience gained for each type of dragon killed. The experience is rewarded regardless of whether the dragons are the current Slayer assignment.

It costs 5 trinkets to teleport to any of the following locations: