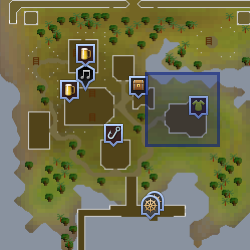 Dodgy Mike sells pirate clothing from his shop, Dodgy Mike's Second-hand Clothing, on Mos Le'Harmless. His stock consists of pirate boots, pirate leggings, stripy pirate shirts and pirate bandanas. Players need to have a book o' piracy when trying to trade with him, unless they have completed Rocking Out.

If the player asks him about the pillar outside of the shop, he will try to sell it to them. Asking about the state of the clothes he sells results in another humorous discussion.

Retrieved from "https://runescape.fandom.com/wiki/Mike?oldid=24563106"
Community content is available under CC-BY-SA unless otherwise noted.