Start a Wiki
For the item from Rune Mysteries, see Tower mindspike.

The mindspike is a staff that is capable of changing its element to air, water, earth or fire. The mindspike is a drop from killing troll shamans in the east portion of the Troll cave north of Burthorpe, and wolves outside Burthorpe mining cave.

Only one mindspike can normally be obtained at a time; however, this can be circumvented by changing the mindspike to any element other than air. This is because the mindspike is always obtained as a drop in its air form. Mindspikes of the same element will stack in the bank.

The mindspike has a special attack, as do its melee and ranged equivalents, the keenblade and quickbow.

The mindspike's special attack is Rune Flame. This costs 75% adrenaline and blasts the target with 25% increased accuracy for 100-150% weapon damage.

On 10 February 2012, a glitch involving the use of a mindspike staff allowed any player wielding one to hit a 50 on any NPC, pet, or player with it. The NPCs would always drop bones. The glitch occurred after the Burthorpe graphical update, but was first discovered on 10 February, and was hotfixed less than an hour after its discovery.

This glitch was widely used in pranks by players to kill other players' pet cats. This would cause a player to lose their cat on death, meaning they would have to get another kitten and raise it back to 100% growth. However, it would not cause other pets to die; they would simply spawn bones on the ground and not vanish. The glitch worked by clicking the special attack bar and then casting any combat spell on an NPC that was previously unattackable. Bankers, familiars, and random event NPCs could all then be attacked in this fashion. Due to this glitch, it was discovered that most non-combat NPC's had 1 life point. It was also discovered that clan vexilla are NPCs, also with 1 life point - a planted vexillum could be killed by this glitch.

This glitch was also used to temporarily break certain types of bots, by killing the Dungeoneering banker.

A few non-combat NPCs, like cats, would attack back using this glitch. This is likely because cats are able to fight in the Ratcatchers quest, so they have an amount of life points set by Jagex. 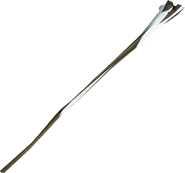 A detailed image of an air mindspike A detailed image of a water mindspike 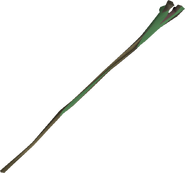 A detailed image of an earth mindspike A detailed image of a fire mindspike

A player wielding an air mindspike

A player wielding a water mindspike

A player wielding an earth mindspike

A player wielding a fire mindspike

Retrieved from "https://runescape.fandom.com/wiki/Mindspike?oldid=21108360"
Community content is available under CC-BY-SA unless otherwise noted.