The Mining and Smithing beta is a beta that started on 12 February 2018 at 15:00 UTC and lasted for 2 weeks. The beta offered the chance for all players to try out some of the core features for the upcoming Mining and Smithing rework. Players could join this beta through a connection from the RuneScape Website, which opened the players client allowing them to join worlds 200, 201, 202 and 203.

Decorated Doric can be found in the Smithing building, players can hand in decorated items at him.

A poll booth can be found next to the shops to give feedback on the beta.

Upon first entering one of the beta worlds, the player is placed in front of 12 shops and one large red lamp with the same model as an experience lamp. These shops provide the player with much of the content as if they were in a sandbox world. The shops are as follows:

Available ores to mine

Once a player enters the world there are many ores which are available to mine. Those being the ones already inside the game (copper, tin, iron, coal, mithril, adamant and runite ore) and the new, introduced ores, luminite, drakolith, necrite, phasmatite, bane, dark animica, light animica, living rock, and elder runite ore.

Currently all the new available ores do not have any textures as Bars, ores, or ore rocks. These are instead replaced by cubes of different colours.

The mining rework includes many new features. Ores don't deplete anymore, making mining more similar to the current Seren stones. Ore gathering is now independent from experience and uses a progression mechanic instead. New mechanics such as Rockertunities and Stamina now heavily reward the player to be active while mining.

Ore rocks don't deplete anymore, instead they now work with Hardness and Difficulty. For a more detailed explanation see Mechanics.

To mine ore the player has to fill the progress bar above their head, one ore equals one full progress bar. The necessary amount of progess needed is determined by the rocks Difficulty and outside of Rockertunities (which multiply progress for 1 swing by 5) no more than the rock's Difficulty can be gained in progress per swing. Additionally each rock has a Hardness value and each pickaxe has a Penetration value. If the penetration of the pickaxe is greater or equal to the hardness of the rock then this mechanic can be ignored, else the remaining hardness will be subtracted from the progress made each swing. With all that in mind the complete formula for determining the progress per swing is as follows:

is the Progress per swing

is the Rockertunity multiplier, which is either 1 or 5

The player now has a stamina bar which determines how long it takes to swing the pickaxe. Clicking the rock fills the bar completely. The stamina bar is unlocked at level 15 mining.

Each rock has an xp multiplier. This value is multiplied with the progress made per swing to determine the xp drop

Upon mining, a nearby ore of the same type will start to glow. Upon clicking it rewards the player with 5x the xp for that swing and additional progress.

The ore bag is a new feature similar to the coal or gem bags. This item is supposed to replace the coal bag once released. The ore bag holds ores inside of it, each ore has a different amount of space it takes up in the bag.

The Smithing rework includes many new features. The furnace now contains a hopper which allows the player to place seemingly unlimited amounts of ore inside, allowing them to be smelted in rapid succession.

Smithing any type of ingot into armour, weapons and tools however is now approached differently. You choose which item you wish to smith at a forge and you are then given an in progress smithing object. This is then heated at the forge. This fills up a bar above the players head, which represents the heat that the item has. The player then proceeds to smith the item on the anvil, which furthers the progress of the item, while also subtracting heat from the item slowly. The higher the heat an in progress smithing object has, the faster the smithing progresses. Heat does not dissipate as time passes however. It only dissipates when the item is being forged at an anvil. For a more detailed explanation see mechanics below.

The amount of bars used for upgrading depends on the bars used making the item:

Decorating is only available for rune and higher tiers. Decorating an item requires it to be at the highest available upgrade level. Decorating turns the item into a untradable, unequippable version which can be turned in for a chunk of xp to Decorated Doric.

To smith items they now require heat to forge and process. When first started in progress smithing objects start with 60 heat before any further heating in the Forge.

The amount of heat each item can hold is dependent on the player's Smithing and Firemaking level and with 99 in both skills the maximum amount of heat is 894. Visible boosts also apply. The exact formula is as follows:

The progress needed to smith an item is dependent on the tier and amount of the bar used and the upgrade tier of the item.

The Smithing xp of any given item is determined by the total of bars used for that item. 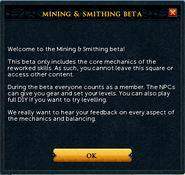 How the ores are laid out in the beta world

Retrieved from "https://runescape.fandom.com/wiki/Mining_and_Smithing_beta?oldid=24924382"
Community content is available under CC-BY-SA unless otherwise noted.