OS
This cape has an untrimmed, hooded, hooded trimmed, and master version.

The Mining cape (t) is the Cape of Accomplishment for the Mining skill. It can be purchased for 99,000 coins alongside the Mining hood from a dwarf at the Mining Guild entrance or Elen Anterth in Prifddinas by players who have achieved level 99 Mining. Mining capes are brown-greyish in colour, have the mining skill icon, and have a light blue trim if the player has more than one level 99 skill.

The mining hood can be attached to the cape by using one on the other, creating a hooded mining cape (t). It can be detached with a right-click option. 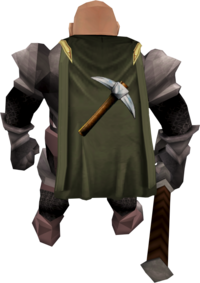