Mithril seeds are items that can be planted, in order to produce flowers of a random colour. When planted, they will appear underneath your feet, and then you will automatically move to an adjacent square. Immediately after this action, players are given the choice of picking up the flowers, or leaving them. It is advised that the player take the flowers, due to their monetary value and their use in the Summoning skill, for making Praying Mantis pouches. Mithril seeds cannot be taken onto Entrana.

On 18 March 2013, an anti-gambling update changed the way flowers would appear. All flowers planted are shown as white, but picking them still gives a randomly chosen colour flower. This measure was done to prevent “hot or cold” games that were introduced when Free Trade was brought back to the game on 11 February 2011. Hosts took cash and would return a multiplied amount as promised if the player was right. Although this was a trust trade, players were statistically likely to lose their money in their bets.

40 Mithril seeds can be obtained as a reward from the Waterfall Quest. Players can also purchase up to 500 of them at Legends' Guild, which slowly restocks over time. 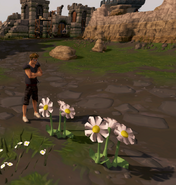 The following is a table listing the odds that an individual colour will result. The sample used was of 25,257.

Retrieved from "https://runescape.fandom.com/wiki/Mithril_seeds?oldid=24534608"
Community content is available under CC-BY-SA unless otherwise noted.