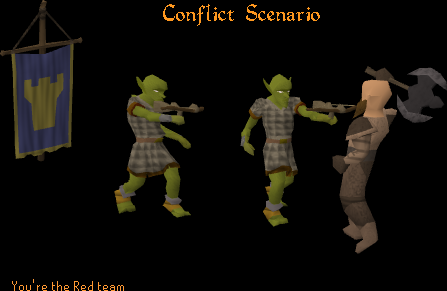 Conflict is one of the scenarios of Mobilising Armies.

This is the standard scenario for the game, being the first to be played by all, and the "lowest levelled" scenario. No rank points are required to play on the Conflict battlefield. Four teams are placed on a battlefield and must kill each other off, one by one. This version is a "free-for-all". The duration is 30 minutes or until one team is successful in defeating all of their enemies. The winning player will receive 2 rank points while any other team who is not victorious, but lasted for over 4 minutes will receive 1 rank point. Zero rank points are received if a player does not last 4 minutes or does not issue at least 10 commands to their troops during the game. Players will also receive a certain amount of reward credit based on how much investment credit they wagered in the beginning of the game, how many squads they defeated in the battle, and how long they stayed in the game for.

The Conflict scenario has been criticised by many players as many teams choose to "camp" (or do not move, waiting until they are attacked) and can cause a round to drag out for the whole 30 minutes. Players attempting to attack "camping" teams usually end up losing in the long run. Some players feel that camping is against the spirit of the game even though a large majority of players end up camping.

Beware: this is only temporary any aggressive enemy will just move around it

Retrieved from "https://runescape.fandom.com/wiki/Mobilising_Armies/Conflict?oldid=15350359"
Community content is available under CC-BY-SA unless otherwise noted.