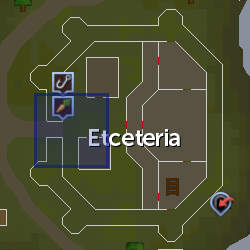 Moldof is a subject of Etceteria, a small island in the Northern Sea not far off the coast of Rellekka. He appears to be an average villager. Moldof plays a minor role in the Royal Trouble quest, in which he helps the player investigate the apparent conflicts between Etceteria and the neighbouring isle of Miscellania.

Prior to the release of Royal Trouble, Moldof was attackable. Like most of the island's attackable residents, he was level 1, dropped only bones, and had ten life points. Killing him would lower the player's approval rating if they were managing the kingdom. He was made unattackable when he received a role in the quest.

Retrieved from "https://runescape.fandom.com/wiki/Moldof?oldid=24563463"
Community content is available under CC-BY-SA unless otherwise noted.