The profit rate assumes 120 kills per hour. Your actual profit may be higher or lower depending on your speed.

Tormented demons drop a variety of unique dragon items: dragon limbs, dragon claws, and components of the dragon platebody. Tormented demons have a unique behaviour in combat; once this behaviour is learned, you can effectively nullify almost all damage. Unlike with most monsters, protection prayers and deflect curses render their attacks almost completely useless; your prayer will either successfully block the attack or reduce the damage to 1.

There are 3 unique behaviours of tormented demons: their fire shield, their protection prayers, and their roar.

The tormented demon's fire shield greatly reduces the amount of damage it takes from all attacks; however, it is easily removed for 1 minute when the demon takes damage from darklight or holy water. Once removed, attacks will deal full damage. They always spawn with their shield up.

All demons start off protecting from melee attacks; however they can switch between protection from all 3 sides of the combat triangle. When protecting itself from any combat style, all damage is nullified, and thus it may be only attacked with the other 2 styles. When the demon has endured 3,100 damage from a style, it will switch its prayer to protect against it. Their prayer does not protect from overkill damage; e.g. if 3,000 then 2,000 damage is dealt, the full 5,000 damage will be dealt. The extra damage will not count towards the next 3,100. When their fire shield is up, the damage before reduction counts towards the 3,100 rather than the amount it was reduced to.

At frequent intervals, the demon will roar which has either 1 or 3 effects. The first effect is its special attack: a non-blockable, area-of-effect magic attack. Damage may be avoided by dodging the attack, but it cannot be reduced with deflect from magic. The other effect of the roar is actually 3 at once; it will randomize its attack style, weakness, and stat increase/decrease. As the changes are random, it is possible for a roar to cause no change to the demon's abilities. There is no correlation between weakness and attack style. Demons are reluctant to use the second effect of the roar if their target is not protecting/deflecting against the style they are currently using.

Tormented demons will only attack with ranged or magic from a distance and will also attack with melee when you are in range. Their roar only switches between magic and ranged; melee is always available to them without having to switch. Note that if you use either ranged or magic on a demon that is currently using melee and it cannot reach you, it will cause it to roar and switch to ranged or magic. Familiar damage done to the demon seems to times by three approximately when calculating enough damage for them to switch prayers. For example, if a steel titan were to hit 1200, the demon would switch to whatever attack style the steel titan used on the demon at that point, as this would equal 3600 when multiplied by 3 and exceed the damage limit of 3100.

Accuracy and damage output is important when fighting tormented demons. As damage can be almost entirely protected against, the accuracy increase from void gives it an edge over higher-tiered armours that give increased defensive capabilities. Void is also classed as all type armour, so using it will not lower your accuracy when changing combat styles. This gives its damage increase the edge over higher-tiered power armours, which are only effective with one combat style, albeit requiring an extra switch whenever you alternate styles.

It may be too difficult to use abilities entirely yourself; however, even if you can keep up, activating Revolution will help significantly. It is also wise to have your protection prayers on the action bar as well. Below is an example action bar:

This action bar makes use of abilities with short cooldown times. 3 basic abilities for each style should be sufficient. Thresholds are very useful for quick and heavy damage, but avoid using them except when the demon has just switched protection prayers to avoid losing damage to overkill. Keep track of how much damage you are doing. Switching styles before you release a blocked attack can speed up kills in the long run.

Avoid using Fragmentation Shot and Combust. Damage-over-time and combo attack abilities are hindered here, as the demons' protection prayers will not allow them to deal full damage. 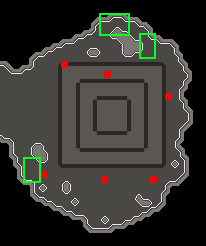 While damage can be almost completely nullified from tormented demons, their varying attack styles makes it dangerous to be in combat with more than 1 at a time. As tormented demons are aggressive, the best approach is to lure one target into a safe spot to kill it uninterrupted. The map to the right shows the three most effective locations to lure demons with.

Demons spawn with the protect from melee prayer on. If you are using darklight, you should begin attacking with ranged or magic and wait for its prayer to change. When it changes prayers, you will need to equip darklight to deal a damaging blow. A miss will not remove its shield. If you are using holy water, you may use that right away to remove the shield. Again, the attack must deal damage. From here on, you should not need to worry about the shield again. Simply watch for its prayers and attacks and act accordingly. Switch styles when it changes prayers or you know you have done enough damage. If you want to keep track of your damage output for style switching, it is advisable to have "Target information always on" checked in your settings.

The other half of the strategy is knowing what attacks the demon uses. You should not have to worry about melee; they will only use it when adjacent to you, and you will only ever be adjacent for a brief moment if you are using darklight. The damage calculation for a tormented demon's attack occurs when it hits you, not when the attack is fired. While it is best to have the proper protection on earlier, this delay means you can still prevent damage if you act quickly. When using ranged, the demon lifts its arm and makes a throwing motion that fires a vanilla-yellow group of spikes. When using magic, the demon lunges its head backwards then forwards as if sneezing, firing an orange fireball. Remember that when the demon roars, it does not necessarily mean it will change its attack style; however, when you see the roar, you should increase your awareness and be ready to swap prayers if necessary.

A combat familiar can be used to significantly speed up kills. As for the steel titan mention above, if you are using ranged and magic, then an iron titan would frequently cause the demon to use protect from melee allowing you to be less likely when having to switch styles. A steel titan should only be used if you are not using ranged as one of your styles, as its primary attack is ranged; note that on occasion it can use magic and can also use melee when in melee distance. For ranged and magic, an iron titan is the best choice as its primary attack is melee, although may sometimes use magic as well. Either titans' respective special scrolls are very useful here too.

For more kills per hour (as much as 150 kills per hour) it is recommended to use dreadnips set on magic attack style, a steel titan and a dual wielded Darklight, while only picking up the special drops. With them being attacked by all 3 attack styles you effectively always have 2 styles hitting which makes kills a lot faster. With the utilization of a personal slayer dungeon set with two Tormented Demon spawns, you can even achieve as high as 185 kills per hour.----

Due to constantly changing prices on the Grand Exchange, some information in this article may or may not be current.
It is strongly recommended to check the live prices on the Grand Exchange before making large investments in any method.
All prices on this page are cached, meaning it is possible that they appear out of date.
To force a new cache of this page, click this link.
If a money making method is out of date, you can edit it or leave a message on the talk page.
Community content is available under CC-BY-SA unless otherwise noted.
Advertisement