Monk's Friend is a short novice quest. The monks of Ardougne Monastery ask you to do them a couple of favours, allowing them to throw a party without any setbacks.

A child has had their blanket stolen! Find the thieves' den and return the blanket, then help Brother Omad organise the drinks for the child's birthday party.

Start the quest by talking to Brother Omad at the Monastery, south of the East Ardougne zoo. He wants you to retrieve a child's blanket, which has been stolen by bandits. Every night since the blanket was taken, Brother Androe's baby boy has been crying relentlessly.

The blanket can be found in a secret cave hidden under a ring of stones in the forest south west of the Clock Tower. Note that the cave is not marked on the minimap, and the ladder is not visible until the player is inside the ring of stones.

Exit the Monastery, and immediately head west. Just east of the Khazard Battlefield and south-west of the Clock Tower, look for a perfect circle of grey stones, which is not shown on the minimap.

When you enter the stone ring, a ladder will appear.

The ladder will not appear if you are standing directly on top of the stones.

Climb down the ladder, and you will find yourself in the Thieves' Hideout. Take the southern path. In the south-west room, you'll find the child's blanket on a table, guarded by 2 level 21 thieves and a level 25 Head thief. They are not aggressive.

Take the child's blanket, and bring it back to Omad. He will be pleased as he can now sleep at night. Talk to Omad again. He now feels better and wants to organise a party for a child's birthday.

Brother Omad needs some wine from Brother Cedric for the party. Cedric has crashed his cart. You can find him in the middle of a hangover around the southern fence of the Ardougne Zoo, and he will need a jug of water to sober up. Jugs can be bought from the general store in East Ardougne, and to fill this jug, return to the monk and use the jug on the well next to him.

Give the jug of water to Cedric to sober him up. Now he only needs logs to repair his cart. Cut a log if you haven't already done so, and talk to Cedric again. He can now repair his cart and asks you to head back to Brother Omad to tell him he'll be there soon.

Go back to the Monastery and speak to Brother Omad, who can finally commence the party now that everything is in order. During the party, balloons will drop from the ceiling, and the monks will dance with you.

When the party is over, the quest is complete. Unfortunately, none of the balloons contains anything. However, burst at least one to complete an Ardougne Easy Task. 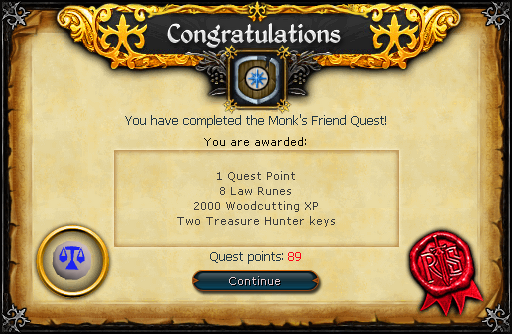 Completion of Monk's Friend is required for the following: