OS
This article is about the monster. For the race, see Monkey (race).
For other uses, see Monkey (disambiguation).
Loading...
Item 1NPC 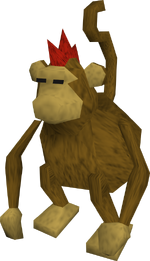 Monkeys are small primates that may be found in a variety of jungles. They are not ideal for training combat, as they have a low amount of life points and have few useful drops. However, monkey bones do give 11 percent more Prayer experience than regular bones. Monkeys can be found in the Mos Le'Harmless jungle, in Ardougne Zoo and spread across most of Karamja.

During the Tai Bwo Wannai Trio quest, all monkeys located on Karamja cannot be damaged by Melee attacks (if attacked, they taunt the player that tried to attack them), so Magic and Ranged are the only ways to kill them. This only occurs during the quest; before and after the quest they can be damaged by all attacks. It is possible to kill one without using Magic or Ranged by using ring of recoils. If the player is wielding a halberd and is standing out of the monkey's melee range then they will be able to hit the monkey with the halberd's melee attack.

During (and after) Monkey Madness, some of the monkeys in Ardougne zoo can be talked to with the use of a Monkeyspeak amulet, in order to get one of them to jump into your backpack.

Note that Mos Le'Harmless monkeys will only drop monkey bones, regardless of whether Tai Bwo Wannai Trio has been completed.

Monkeys can be found in three places: