Start a Wiki
OSWP
This article is about the species. For the monster, see Monkey.

Monkeys are an animal species found on RuneScape. They are traditionally located in thick jungles on remote islands, though can also be seen in Ardougne zoo. Monkeys are known for their higher intelligence when compared to other animals, being able to utilise simple tools and converse between each other.

Despite monkey traditionally referring to a primate with a tail in real life, in RuneScape it also refers to primates without tails such as Gorillas. This is evident with the Monkey Guard which is actually a gorilla and the official lore Tumeken's Dream which uses monkey and ape interchangeably.

The Cabbage Facepunch Bonanza update has introduced some monkeys with new graphics including the Monkey minion and the Gorilla guard which both appear in the Cabbage Facepunch Bonanza minigame. Monkey minions appear to be Karamjan monkeys because of what could be a red mohawk on their heads. Players transform into Gorilla guards if they are killed or fail to reach the other side of the maze. Graphical updates for other monkeys seems likely as many other races have received them.

In RuneScape, there are four known species of monkeys: the Karamja monkey, the 'harmless' monkey, the Ape Atoll monkey and the nearly-extinct Kharidian Desert monkey.

The Karamjan monkeys (Simiiformes Karamjan) are yellow-furred, dangerous, and with a red mohawk. These were once regular animals, but they appeared very different, and still do. They are only found on Karamja. Karamjan monkeys are known by scholars for their intelligence, though are not as smart as their Ape Atoll equivalents.

Karamjan monkeys will attempt to flee from players who have started the Tai Bwo Wannai Trio quest. The only way to kill a monkey when this is happening is to use Ranged, magic or a Halberd to kill it.

There are Karamjan monkeys located in the Ardougne Zoo as part of 'Monkey Madness' Quest most are un-attackable but a few are. Oddly enough, Karamjan monkeys are also found in the Monkey Colony, despite the colonists supposedly being from Ape Atoll.

Harmless monkeys are located throughout the jungles of Mos Le'Harmless. They are very similar in structure to the Karamjan monkey, being the same size and shape. The harmless monkey is a lighter shade of brown then their karamjan counterparts, and they lack their distinctive red mohawk (although they nevertheless have some on their chathead.). When talked to with an amulet of monkeyspeak, they speak like pirates, and express fear of the nearby jungle horrors.

The monkeys of Ape Atoll look very similar to other monkeys, but have black fur and lack a mohawk. Additionally, some of them are known to wear clothes. While the Gorillas of the island have black fur too, they are much larger and stronger than their monkey brethren, some of them are bearded, and compared to the monkeys, fewer of them wear clothes.

The primates of Ape Atoll are seemingly much more intelligent than their Karamjan brethren, perhaps due to the influence of the ape god Marimbo, and they worked together to build the city of Marim. Since then, great advances have been made in all fields; they developed the ability to make, wield and use weapons. Ape Atoll monkeys somehow have access to dragon scimitars, in addition to magic and ranged combat. They also have constructed many great buildings and a religion honouring Marimbo. It is presumed that Ape Atoll monkeys and gorillas do not believe in Apmeken, as Awowogei calls her a "false monkey-god".

Many people believe these creatures to be docile, however, not many realise that if they wandered too far into monkey cities, apes and monkeys could probably kill them immediately. Ape Atoll monkeys see themselves as superior to all other races, and as a result want to invade and conquer other civilizations. 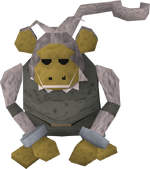 Little is known of the monkeys located in Kharidian Desert. They existed in the early ages on the western side of Kharidian Desert close to tribes of humans. They were a highly social and friendly species, bringing joy to all those around them. It was because of their good nature, that according to legend, Tumeken visited them in a dream and granted a female monkey lesser deity powers as well as the ability to change shape. She became Apmeken, the goddess of mental pleasures.

At an unknown point less than 50 years ago, all monkeys in the region were wiped out by Leeuni, Ayuni and Eruni, three demonic apes created by Amascut using Apmeken's stolen voice, sight and hearing respectively, in order to ensure she wouldn't return to the desert. Only the Three wise monkeys managed to survive, despite each losing one of their senses, by working together to escape the onslaught, and were forced to relocate to Karamja, before eventually settling in Ape Atoll, resulting in none being left in the desert today. During the Do No Evil quest, the three wise monkeys return to the desert to set up a colony, along with some colonists from Ape Atoll.

In Ape Atoll or the Ardougne zoo, players wielding a particular greegree can transform into monkeys themselves. There are eight greegrees available: A Monkey greegree (Karamjan), 2 types of Zombie (small and large), 2 types of Ninja (small and large) and 3 types of Gorilla (with or without beard and a special blue-faced one). Thus, players are able to transform into any of these species of monkey. This transformation is required in the Monkey Madness, Recipe for Disaster and Do No Evil quests.

With level 27 Hunter and level 95 Summoning, a Baby monkey can be caught using a Box trap, giving 100 Hunter experience. A banana bait is needed, and a baby monkey requires bananas to grow into an adult monkey.

Retrieved from "https://runescape.fandom.com/wiki/Monkey_(race)?oldid=25381314"
Community content is available under CC-BY-SA unless otherwise noted.