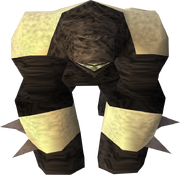 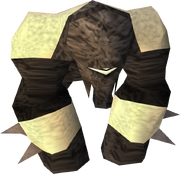 Monkey Guards are level 89 and 88 gorillas that reside in Ape Atoll's temple.

Monkey Guards live on the ground floor and first floor of Ape Atoll's temple. They have a large amount of health and throw vicious punches that can hit up to 256. When they have very low health, they will beat their chest, causing them to heal around 20% of maximum life points; they appear to be able to do this indefinitely but only while in melee range.

Because there is an altar in the temple, players can train combat on them by fighting them with Protect from Melee on the whole time. When they are low on Prayer, they can pray at the altar and continue their training. Players can also use stat-boosting prayers such as Piety to aid training.

Most players wear a form of Prayer armour and damage boosting armour (depending on what they prefer). However, prayer isn't needed that badly because of the nearby altar. It is recommended to bring a bonecrusher, as their bones are worth slightly more prayer experience than normal bones.

When ranging the guards, use range-boosting prayers. This will drain your prayer twice as fast than using only Protect from Melee, but being next to an altar to recharge makes this irrelevant.

Retrieved from "https://runescape.fandom.com/wiki/Monkey_Guard?oldid=25381203"
Community content is available under CC-BY-SA unless otherwise noted.