Do No Evil colony 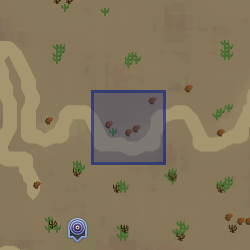 The monkey colony is a minuscule village located in the Kharidian Desert. It is built during the quest Do No Evil and can be only accessed during or after the quest. The colony is officially ruled by King Awowogei, but appears to be governed locally by the three wise monkeys, Mizaru, Kikazaru, and Iwazaru as they are in an elevated position compared to the other monkeys.

The fastest way to get to the colony is by magic carpet, either by the one at the Shantay Pass or the one in the south part of Pollnivneach. Another quick way to get there is to take a bandit camp teleport and run east-north-east from there. A slower alternative is through fairy ring BIQ then running south.

The rug merchant in the outpost is a monkey and there is a human assistant meditating on the floor.

An monkeyspeak amulet is not needed to take the carpet. Simply attempt to talk to the monkey rug merchant and the human assistant will speak to him for you. Though, the merchant sometimes gets confused and gives the player a banana.

The monkey outpost contains three different stalls. A gem store, a general store and a banana store. Their locations vary depending on where they were placed during the quest, making them rather unique.

Wandering around the camp is a chimp ice chimp. As his name implies, he sells chimp ices for a price of 100 coins. These chocolate treats can be delivered to King Awowogei for additional rewards after the quest, most notably cosmetic improvements to the colony. After 5 deliveries, a monkey statue will appear in the colony. The same will happen after 10 and 15 deliveries. Upon bringing the 25th chimp ice to the monkey king, all the guards in the colony will become monkey knife fighters, though these cannot be pickpocketed nor be knocked out.

With 80 Agility a hidden cavern in the colony can be accessed, up the rock wall south of the tent, for 20,000 Agility experience and additional rewards.

Retrieved from "https://runescape.fandom.com/wiki/Monkey_colony?oldid=25380912"
Community content is available under CC-BY-SA unless otherwise noted.