A camel loaded down with granite rocks.
Please add a map!

Mostafa the Camel is a camel who is owned by Aligra Nite. Upon speaking to him, he states that he was solving the problem of how to write his proof of the twin prime problem without thumbs before Aligra suddenly loaded granite rocks on him against his will. 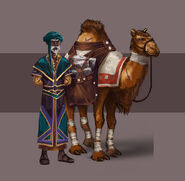 Click an image to enlarge
Retrieved from "https://runescape.fandom.com/wiki/Mostafa_the_Camel?oldid=24926158"
Community content is available under CC-BY-SA unless otherwise noted.