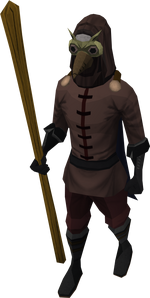 Mourners are elves that have joined the Prifddinas Death Guard. They can be found in and just outside West Ardougne, in their headquarters in the same city, and walking from Prifddinas to Arandar. They were introduced with the Plague City quest, and play a large part in the Elven Civil War quest storyline. Those in the basement of the Mourner HQ can be killed for elf slayer assignments.

The Mourners at Arandar and in the Death Guard HQ in West Ardougne can be killed for the Mourner gear they drop, required for Mourning's End Part I, Part 2, Within the Light and Plague's End. The mourners in West Ardougne have no drops.

After the events of Plague's End, they are replaced by Knights of Ardougne and elves, which have exactly the same stats, although they do not have the same drops and do not count for elf tasks.

Retrieved from "https://runescape.fandom.com/wiki/Mourner?oldid=24925467"
Community content is available under CC-BY-SA unless otherwise noted.