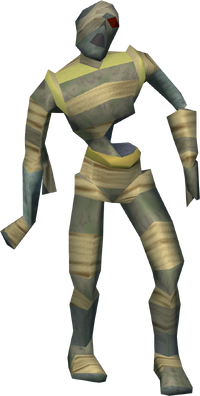 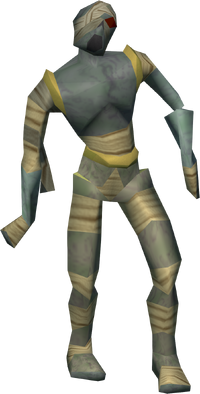 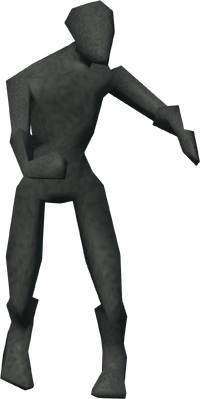 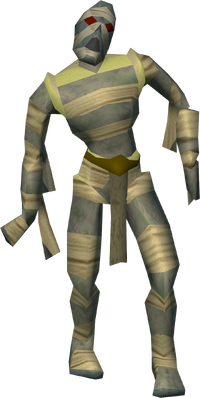 They are the only monster known to drop ancient staves. With the exception of a one-time purchase from Eblis, killing them is the only method to obtain them, besides purchasing them from other players. They also drop the Mummy Champion's scroll, which may be used to challenge the mummy champion in the Champions' Challenge distraction and diversion.

Mummies are highly flammable, and as such are set aflame when they are hit by a fire spell. While they are weaker to fire than other attacks, being set on fire does not affect their combat prowess. If hit by a water spell while on fire, they will return to their normal state, and if killed while on fire, they will turn into ashes. As they are undead, they are also susceptible to the salve amulet and Undead Slayer invention perk.

Aggressive mummies with the examine text of "Highly flammable!" spawn from the sarcophagi in the Jaldraocht Pyramid if a player is standing next to them, with another spawning as soon as the last is defeated. These mummies are completely immune to all attacks except fire spells, but cannot be set on fire like the other mummies. If players position themselves between two sarcophagi, they can be used for a relatively low-attention way of killing mummies, particularly useful if hunting for their champion scroll.

As the mummies in the Chaos Tunnels are numerous and close together, using area of affect abilities and spells such as chain and blood barrage provides an easy way to take down lots of mummies relatively quickly, and may serve as a better option for champion scroll hunters than the ones in Jaldroacht.