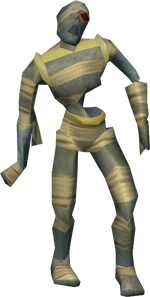 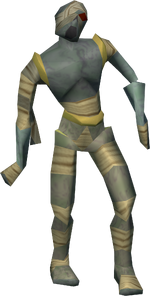 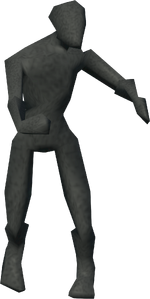 Mummies are undead enemies that can be found on the western section of Ullek cliffs, on the cliff overlooking the Agility Pyramid. A shortcut to them from the Agility Pyramid can be unlocked by placing a rope on a rock to the west of them.

These mummies are very similar to those found in the Jaldraocht Pyramid and Chaos Tunnels, but are slightly weaker. Like those in Jaldraocht, they are weak to fire spells, and can be set aflame using them, and extinguished with water spells. They are also vulnerable by the salve amulet and Undead Slayer perk. As their area is affected by desert heat, waterskin or an enchanted water tiara may be helpful when fighting them.

As they are aggressive and respawn very quickly, killing them is a decent method of obtaining the Mummy Champion's scroll. They are also a good way to obtain scabarite notes as part of the Scabarite Notes miniquest.

Retrieved from "https://runescape.fandom.com/wiki/Mummy_(Ullek)?oldid=24923814"
Community content is available under CC-BY-SA unless otherwise noted.