The emissary of Bandos. 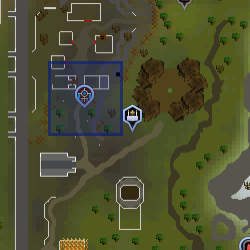 Murknose is a seemingly powerful goblin who preaches the word of Bandos, effectively acting as his emissary. He can be found at the entrance to the Asgarnian Goblin Village. According to Murknose, if one chooses to follow Bandos, the Big High War God will "make you strong". Murknose will also provide a banner of Bandos and a Book of the Gods. The title "[Name] of Bandos" may be activated through this emissary.

After Bandos' death, Murknose continues to act as an emissary, preaching that Bandos was right all along and someone stronger came and defeated him (Armadyl). Murknose continues to advocate that the strongest should rule, and encourages the player to ally with whoever they believe to be the strongest. He will give allies various tasks to complete.

Retrieved from "https://runescape.fandom.com/wiki/Murknose,_Emissary_of_Bandos?oldid=24923421"
Community content is available under CC-BY-SA unless otherwise noted.