Start a Wiki
RSCOS
This article is about the sailor in Port Khazard. For the zombie pirate from Bloodsplatter Isle, see Mechanical Murphy. 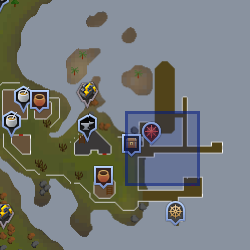 Murphy is a sailor who lives in Port Khazard. He can be found on the north pier at the east side next to the red star

minigame icon. He runs the Fishing Trawler minigame, and also makes and replaces fishbowl helmets and diving apparatus, primarily used for the Pirate Pete section of Recipe for Disaster and later for The Great Brain Robbery, A Clockwork Syringe, Rocking Out, and Beneath Cursed Tides. Multiple pairs can only be obtained using the drop trick. He will also take you to the Mogre Camp if the players ask to go.

He can be contacted with the NPC Contact spell to find out about when the next trip of the fishing trawler will be. He also is the NPC that you can obtain a Sextant from for coordinate clue scrolls after speaking to the professor in the observatory.