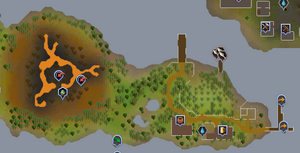 Musa Point is the northeast edge of Karamja, located west of Port Sarim. It hosts a dungeon, as well as the only spot to cage and harpoon fish for free players outside of the Wilderness.

Free players may only access Musa Point by boat from Port Sarim, at the cost of 30 coins to sail in either direction. Three sailors on the central area of the docks, Seaman Lorris, Seaman Thresnor, and Captain Tobias, will ask if the player wants to go to Karamja. Members with any level of Karamja gloves will find the tariff for the journey reduced to 15 coins, and a ring of charos (a) allows access for free.

Members can also enter via the gate to the west from Brimhaven, use the amulet of glory to teleport just south of the fishing spots, or take the charter ships for a fee.

When the player lands on Musa Point, they can then get off the boat to walk on the dock and explore the island. There are monsters near the north-western part of the island around the volcano, so low-levelled players should stay away from that part of the island. It is a spot for level 20 scorpions, level 10 snakes, level 12 monkeys, and level 30 jungle spiders. For low level players, it is a good training spot, as well as a prayer spot, as monkey bones are dropped by the monkeys. This is the only place where free players can find snakes (do not drop snake hides in free to play) and monkeys (do not drop furs or meat in free to play).

A hidey-hole for a 2-way grapple shortcut from Musa Point to southern Karamja can be found west of the Karamja General Store along the shoreline. It appears as a "Convenient rock" near a "Strong tree" and is located where the shortcut is indicated on the minimap. The hidey-hole is a buildable storage spot to store a crossbow and grapple and eliminates the need to carry a crossbow and grapple to use the shortcut. To construct the hidey-hole, level 52 Construction is required as well as a saw and hammer (the tool belt works), 4 mahogany planks, a mithril crossbow and a mithril grapple. Level 53 Agility, 42 Ranged, and 21 Strength is required to use the shortcut.

Musa Point has only one store.

Karamja General Store is located west of the boat players arrive on in the F2P part, and is run by Shopkeeper Kofi. Since this part of Karamja is far away from a bank, players rarely sell anything to this store. However, fishers on the island will sometimes sell their fish to this general store. Players sometimes also sell burnt fish, although following an update in which burnt food became stackable, this is no longer a common practice.

Karamja has a few bars, though only one is available to non-members.

Karamja Wines, Spirits, and Beers is the bar east of the general store. The store is owned by a man named Zambo. Players can purchase beer, karamjan rum, and wine from Zambo.

There are quite a few things players can do on the island, mostly to do with the fishing docks and the volcano.

Fishing spot: The Karamja dock is the only place in the free-to-play world where players can fish for tuna, lobsters, and swordfish (except for the Wilderness) making it the most popular fishing spot for non-members. It is a popular chatting place among fishing players as it is routinely crowded. Because the nearest bank is so far away, many players cut (or bring) logs to cook their fish right on the dock, allowing them to cook the fish before noting them at Stiles. A glitch has been spotted at the pier where whilst using a granite crab to aid fishing, the familiar may get stuck tilting at the corner of the pier. This is purely graphical, and the familiar's passive effect and foraging continue to work as normal. 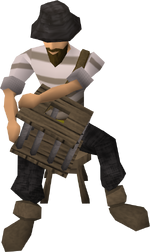 Stiles: A man named Stiles on the southern part of Musa Point was added to the game in the Slayer Challenges update on 21 April 2010, and will exchange raw and cooked fish for banknotes. He appears to be sitting in a chair fixing a lobster pot, and there are two barrels of fish next to him. He is located towards the south, almost directly south of the volcano entrance. He can only exchange lobsters, swordfish, and tuna, which are the main fish caught in this area. Although not technically a bank, he fulfils the primary demands of players, especially free players, training on the island. Prior to his release, players had to either travel off the island and bank their fish, sell them to the nearby general store, or simply drop them.

Luthas' banana plantation: Luthas' banana plantation is the small hut across from Zambo's bar. Players can collect bananas for Luthas and put them in the box outside his hut. When they've filled the box with 10 bananas, Luthas will pay them 30 coins. Prior to the introduction of the money pouch, this was useful if a player forgot their money and could not pay to leave the island. There are 33 banana trees in the plantation, each of which bears 5 bananas. To the north of Luthas' house is a single air rune respawn, and to the east are two normal trees players can chop in order to make fires to cook fish caught at the pier.

Karamja Volcano: Karamja's volcano is in the western part of the island. On the rim of the volcano lie a multitude of dead trees. These trees can be cut for logs, which can subsequently be used to light fires; handy for high-level fishing and cooking at the docks. The volcano hosts a dungeon underneath it. The entrance has a few mid-level skeletons, while there are also lesser demons slightly to the west. After completing the Dragon Slayer quest, players can go through a hidden wall that leads to the crash site on Crandor.

Water sources: Players can obtain water from a well on the west side of Zambo's bar. This well is also one of the spots where the polar bear may be found for Penguin Hide and Seek.

The 2006 Christmas Event was started on Musa Point and set in the surrounding area, including the volcano.

Players talked to Shanty Claws on the north-eastern dock to start the event. Players who completed the event can still see the three children rescued during the event dancing around near the northern dock; players who did not complete the event cannot.

Here are some things you may need while fishing:

Following updates to the tool belt allowing (permanent) storage of a hatchet of any metal, players no longer need to bring a hatchet, as putting a rune hatchet on the tool belt is fairly inexpensive. The closest range is at Brimhaven, or the sulphur vents inside TzHaar City, but they are members-only.

If killing lesser demons inside the volcano, players can bring noted prayer urns, sell one urn to the general store and immediately buy it back. They can then add the air rune respawn to it to collect the demons' ashes.

Retrieved from "https://runescape.fandom.com/wiki/Musa_Point?oldid=24923295"
Community content is available under CC-BY-SA unless otherwise noted.