On Goshima and The Islands That Once Were Turtles, a status bar will be displayed above clusters being harvested, representing their current depletion levels. It takes approximately one minute for a mushroom cluster to replenish its resources after being depleted.

On Uncharted Isles, mushroom clusters are depleted after 100 mushrooms have been collected from the cluster. Once depleted, the cluster cannot be foraged for the rest of the day, resetting at 00:00 UTC. Upon depletion, a filterable message reads: The mushrooms have become exhausted for today.. 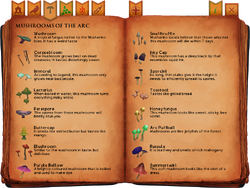 Retrieved from "https://runescape.fandom.com/wiki/Mushroom_cluster?oldid=24923131"
Community content is available under CC-BY-SA unless otherwise noted.