Seems to flitter in and out of existence... 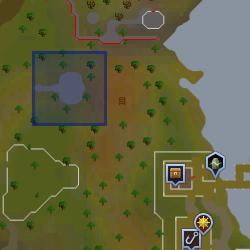 Valdez was an explorer back in the end of the Second Age, though he still exists in Gielinor as an invisible ghost. He can only be seen while the player is wearing the ring of visibility, obtained during the Desert Treasure quest, and can only be understood while the player is wearing an amulet of ghostspeak from the Restless Ghost quest or after completing the hard Morytania achievements. Valdez is the character who begins The Curse of Zaros miniquest, and tells you a little about his story as well as giving you the ghostly robe top.

On speaking to him with both necessary items equipped, Valdez will tell you his story. He was, in life, a loyal follower of Saradomin, and one day discovered an ancient and abandoned temple that appeared to be very old. On investigating inside, he unearthed the legendary god-weapon, the Staff of Armadyl. Rushing away to deliver the sacred artefact to Saradomin, who Valdez assumed would want to use to increase his dominion in Gielinor, Valdez was assailed on his journey back to Entrana by Rennard, a master thief. The staff was stolen from him and he was left for dead, but, because of his involvement with the betrayal of Zaros, though involuntary, he was cursed by the Empty Lord upon his death and was doomed to wander the surface of Gielinor as an invisible entity. After he explains his story he tells you to find Rennard, which begins the player on their journey to discover the secrets of Zamorak's betrayal.

Retrieved from "https://runescape.fandom.com/wiki/Mysterious_ghost_(Valdez)?oldid=24563009"
Community content is available under CC-BY-SA unless otherwise noted.