He has a shifty air about him. 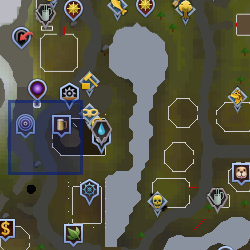 Nails Newton is a citizen of Burthorpe, born and raised in the now war-torn city. He can be found in the city of Taverley, just outside The Pick and Lute pub. He is a thief by profession and currently provides accurate copies of official documents to people upon request, in case they can't obtain the bonafide version. When you say that he is in fact, just a criminal, Nails reasons that he never "beat up anyone that wasn't asking for it, stole anything from someone that couldn't afford it, or scammed anyone that wasn't trying to scam me."

Talking of the pompous merchants walking around the city, he says that he utterly loathes them because they have been "gouging" the poor people of their gold, making a profit out of their misery.

He is the initiator of the quest, Let Them Eat Pie. In the quest, he recruits the adventurer to help him teach a lesson to Rolo the Stout, the head merchant, who has been purchasing food from the city and selling it to the poor refugees at an exorbitant price. He wants you to steal Rolo's seal to forge a letter which would release all the food stockpile to the refugees, for free.

Nails is also a possible solution of a Treasure Trails anagram. He gives you a challenge scroll with the question "How many tables are there in The Pick and Lute Inn?", the answer being 10.