Start a Wiki
This article is about the NPC. For the quest, see Nature Spirit.

A spirit of Nature. 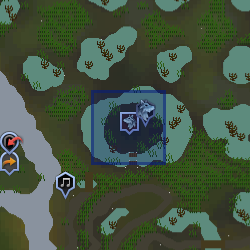 The Nature Spirit resides in the murk of Morytania, in the Nature Grotto at the centre of Mort Myre Swamp. He was once an addled ghost.

His altar acts similar to the altar in the Edgeville Monastery, boosting one's Prayer points by 20. Behind his altar is a summoning obelisk. The Nature Grotto also contains a special wishing well, which acts as a summoning store. On the floor of the cave is a druid pouch which stores any swamp items you receive from your blessed sickle.

He can also appear while Temple Trekking, during which he enchants the player with the power of water, and the player must put out the fires surrounding his grotto.

Ashuelot Reis, in the God Wars Dungeon, is another Nature Spirit who was created via a similar ritual.

Retrieved from "https://runescape.fandom.com/wiki/Nature_Spirit_(NPC)?oldid=24563621"
Community content is available under CC-BY-SA unless otherwise noted.