View source
watch 02:52
Roblox: DeepWoken - The Loop
Do you like this video?
Play Sound
This article is about the slayer monster. For other uses, see Nightmare (disambiguation).
Defined properties:

Nightmares are Slayer monsters that are unlocked after completion of Children of Mah. They require level 80 Slayer to be harmed. To be assigned as a task, the player must purchase the ability from a Slayer Master for 50 Slayer points.

Nightmares can be found in Freneskae through the World Gate by utilising the ritual site option. 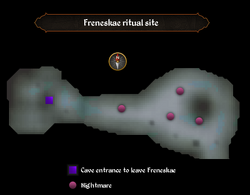 Nightmares normally attack with melee. When combat is initiated, they will often walk onto the square the player is currently standing on, moving them in the process. They can charge a slow-moving special attack (after 5 auto attacks) that can deal over 4000 total damage in two simultaneous ranged hits. The damage from this ranged attack can be reduced to under 1000 damage with Protect from Missiles and Deflect Missiles. They will raise a black sphere above themselves and swing their body (as if holding a ball with both hands and swinging from the side to the front) before using the attack, giving the target at least 1.8 seconds to switch to the appropriate prayer or use a defensive ability. Manually activate Protect from Missiles and/or Deflect Missiles at onset of the special attack and switch manually to Protect from Melee and/or Deflect from Melee, or Soul Split at end of the special attack. Placing protection prayers on a multiple action bar helps with the timing of this mechanic.

If the nightmare dies after beginning its ranged attack, the attack will still hit and should be protected against.

Concept art of the Nightmare

Initial sketch concepts of the nightmare. The model on the left was the model chosen.