Cashes in Zeal points for rewards.

• He runs the game around here.
• The throne looks to be harnessing some sort of energy.
• The mysterious, death-defying Nomad.
• Perhaps proof that no one can cheat death.
Nomad's RequiemNomad's ElegyWight (Sliske's Endgame)
? (edit) 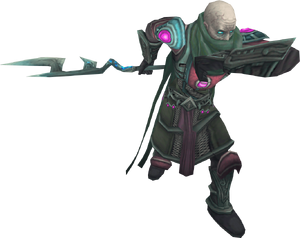 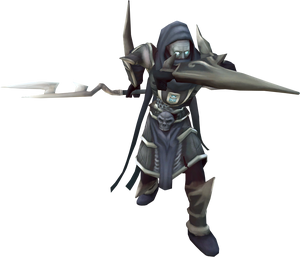 Nomad is an immensely powerful warrior-mage and the host of the Soul Wars minigame that he created. He will offer free tours of the battlefield along with a short explanation of how the game works, or a book that explains fighting in Soul Wars. The game is just a facade, however, and part of the sorcerer's secret plans that he executes in a huge cave complex beneath Soul Wars Island. Nomad has an unfortunate imp minion called Zimberfizz.

Talking to Nomad, outside of Soul Wars, while having Ava's attractor, accumulator, or alerter in the inventory, gives the option to add their ammo retrieving ability to the capes used in the minigame.

With a combat level of 699, he has one of the highest combat levels of any quest monster in the game. He may be re-fought as a class A boss in the Dominion Tower (after Nomad's Requiem) or twice consecutively in a special match.

During Nomad's Elegy, he returns even stronger at level 799 and with 100,000 life points for each of his 4 phases. Another version of him is fought twice during Sliske's Endgame - once on his own, and another time alongside Linza the Disgraced and Gregorovic (the current titleholder).

During Memory of Nomad, he returns much stronger at level 1001 and with a total of 800,000 life points during his phases. Players may defeat Nomad once each week for rewards.

The following takes place during Tales of Nomad.

Nomad lived in a Ghost Town with Zamorakian parents, who were killed by Temple Knights, leaving him orphaned. The resulting grief drove him insane. He eventually moved to Varrock, where the criminals on the streets took advantage of his frailty, turning him to grow stronger and prey on the weak. A mysterious mage called Oreb found Nomad and brought him to the Ourania Cave, teaching him about the ZMI's research on souls. He studied under Oreb and began to consider him to be his Master. However, Nomad felt that the teachings were insufficient. He later killed Oreb, and aware that necromancy could help him avoid death, went to the Lumbridge Catacombs to speak with Dragith Nurn. Nurn, now a skeletal shell, refused to divulge his secrets. Nomad realised that Nurn was a dead end and returned to his research. Realising that the knowledge he sought could not be found in tomes and scrolls, Nomad summoned, captured, and bound the imp Zimberfizz to his service.

Eventually, Nomad learned of Lucien, a more powerful necromancer, and needed to get his attention. Nomad decided to become one of Lucien's rivals, knowing that he would get more attention than being one of his sycophants. Nomad stood against Lucien during the Mahjarrat's invasion of Varrock in 154, destroying Lucien's armies and catching his eye. Nomad joined Lucien, and worked with him in an attempt to gain power in the process. Despite this, Lucien refused to teach Nomad any of his secrets, forcing him to find a new way to gain power to rival Lucien.

Nomad somehow built or obtained the Soul obelisk, a powerful artefact, to gain immense power from souls by secretly channelling their energy into a throne of his making. He attempted to achieve this by harnessing the soul energy from the throne, supplied by the people playing Soul Wars on the surface. Lucien was eventually aware of Nomad's work, and sent agents to kill him but were bested.

By 169, Zimberfizz began to suspect something and recruited an adventurer to check out Nomad's tent. They entered it and discovered Nomad's temple, where they oversaw the man himself being threatened by a trio of elite dark warriors, whom he easily killed. Upon noticing the adventurer, Nomad warned them not to go any further, but they did so anyway. After working their way through the temple, they confronted Nomad on his throne.

Angry that the adventurer came despite his warnings, he was convinced that they were another assassin sent by Lucien. Even though he can could be convinced that they are not an assassin, he refuses to let them leave since they had destroyed a lot of his work to find him and did not want anyone else to know about it. He initially had the upper hand in the battle with various extremely powerful attacks, but was eventually defeated by the adventurer, stating that "[they] have doomed this world" before falling to the floor, seemingly dead.

The adventurer then told Zimberfizz that Nomad was dead, Zimberfizz initially did not believe it and the two returned to the throne room. The adventurer kicked Nomad to show that he was actually dead. Due to his 'death', Zimberfizz became the new Soul Wars host and planned to bottle up the obelisk's souls to sell them. After the two leave, Nomad gets back up on his feet, revealing himself to be alive thanks to the power of the Soul Obelisk. He then teleported to an unknown location, with the intention of hiding from Death. Not long afterwards, Lucien himself was terminated by Dragonkin in the North.

After the death of Guthix and the dawn of the Sixth Age, he watched as the gods returned, and spoke with a Kinshra spymaster, calling him master to sate the spymaster's ego, and pretended to follow him. He disliked the new master, claiming him to be weak, and killed him. Nomad eventually learned of Guthix's divine energy. He was delighted with the energy of a god, and began to train Divination, eventually being proficient enough to harvest Incandescent wisps. Eventually, Death managed to track down Nomad at the Poison Wastes and captured him.

The following takes place during Dishonour Among Thieves.

Zamorak intending to reclaim the Stone of Jas from Sliske, recruited the adventurer and tasked them with assembling the team, including Nomad, stating that he had disposed of traitors in his absence. The adventurer encounters Nomad being attacked by Death, who claims that Nomad has stolen souls that belong to the Underworld, and that he himself is supposed to be dead. The adventurer persuades Death to let Nomad go for now, since he is needed to take down Sliske. Death is uneasy with letting Nomad go, but trusts the adventurer's judgement as they had saved him before. Nomad and the rest of the heist team arrive in Sliske's lair. After the adventurer and Jerrod dispose of the initial guards, they eventually find a large door blocking them and the Stone of Jas. Nomad helps unlock the door by empowering one orb, while Enakhra drains the other to prevent the alarm from triggering. Nomad helps take out the elite wights that are hounding the rest of the heist team, busy fighting off shadow apparitions Sliske conjured. After the battle, Nomad reveals himself to be a traitor to the Zamorakian cause, and attempts to take the Stone of Jas, or at least a piece of it, throwing his spear at the adventurer.

If the adventurer throws the spear back at Nomad, it will prevent him from obtaining a piece of the Stone. Angry, Nomad accuses them of being a "mercenary". If they avoid the spear, Nomad claims a piece of the Stone, becoming greatly empowered from the small fragment. Regardless, Nomad claims that Zamorak is weak and cowering in his hideout. Zamorak then appears, enraged by his betrayal and easily overpowers him. But before the god can land the final blow, Nomad teleports away.

Nomad attempted to siphon all the dead souls of Gielinor to create a god in the Grim Underworld, with his allies Legio Septimus and the "true" Order of Ascension. However, his schemes were thwarted again by the same Adventurer who defeated him at his throne room with the help of Death, Icthlarin, Zanik, Jessika or Korasi (depending who was killed by Wizard Grayzag in The Void Stares Back), Xenia, and Hazelmere. After the construct is killed and Nomad weakened from battling the adventurer, Death and Icthlarin allow the adventurer to give the final judgement. If the adventurer decides to kill him, the camera will pan away as the player executes him with his own spear. If spared, he will ask why he is being shown mercy despite his actions. Regardless, Sliske appears and teleports him away.

Due to Nomad's heavy consumption of souls, his memories are still lingering in Icthlarin's castle, which the player may fight. However, the memory has become considerably stronger, which Icthlarin warns the player about before they re-enter his castle. Upon being defeated, the memory will grant the player access to its bounty, and to return again next week to face its wrath again. Additionally, a Sinister Stranger leaves behind memories of Nomad, starting the Tales of Nomad, delving into Nomad's history through his memories.

Nomad is restored as a wight and summoned by Sliske during the endgame, having been granted some of the power that made the player the World Guardian. He is slain by the player, counting as a god death for the player's chosen god, and is later brought back again to fight alongside Gregorovic and Linza the Disgraced after Sliske attempts to kill the World Guardian. It is unknown what happened to him after the game whether he survived or not. The Barrows Brothers and Linza regained their freedom, Gregorovic returned to the Heart continuing to lead the remaining forces of Sliske, thus Nomad's fate is the only one of Sliske's notable wights which is unknown.

Nomad is an extremely powerful warrior-mage who siphons souls from the Soul Obelisk to increase his power. He is also very skilled in several areas, as he built the Soul Obelisk and the temple underneath his tent on his own. Zimberfizz states that Nomad "certainly knows his ways around Slayer monsters" and caught Zimberfizz with a magic box.

Nomad is capable of using a wide variety of magic, as he uses various teleports to both escape and drag his opponents to him. His knowledge of magics allows him to make clones of himself which are capable of inflicting damage despite not being real. He can charge up powerful attacks such as Disintegrate and Soul Blast. The result of him absorbing countless souls via the Soul Obelisk grants Nomad great power, as he is capable of killing Sliske's Elite Wights in one hit. Nomad can also use his staff as a melee and ranged weapon, shown during Dishonor Among Thieves where he throws it at the player and in Nomad's Elegy where he uses it as a fast melee weapon. He is also capable of resurrecting the dead, although it is unknown to what extent.

Nomad can also absorb souls to increase his power and life expectancy, as Death tells the player that Nomad's soul was due a "long time ago" and that the warrior-mage had taken countless souls from him. This is also shown in between Nomad's Requiem and Elegy, where his combat has increased significantly due to him absorbing many souls.

Nomad kills a player during a Soul Wars tutorial

Concept art of Nomad in Dishonour among Thieves

Retrieved from "https://runescape.fandom.com/wiki/Nomad?oldid=24563751"
Community content is available under CC-BY-SA unless otherwise noted.