Entrance to Dwarven Mine on Ice Mountain 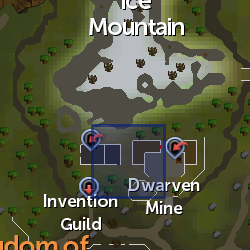 Nulodion is the official dwarf multicannon expert and Weapons Development Chief of the Black Guard. During the Dwarf Cannon quest players meet Nulodion who helps them during the quest.

During the final dwarf quest (Birthright of the Dwarves), he joins King Veldaban, the Dwarven Black Guard and the Trolls to assault the Red Axe base. He gives players five Explosive gears to sabotage the base's cannons.

The scorpion infestation in the Dwarven Mine is his fault. He once bred scorpions to use them for target practice for his cannon, but they got out of control. Nulodion says he has plenty of cannons to keep the scorpions from escaping.

The store is the only place in all of RuneScape that sells the parts of the dwarf multicannon (but only if the player has completed the Dwarf Cannon quest). The store also sells the cannon Instruction manual, and Ammo moulds to make cannonballs. Ammo moulds are used in the Between a Rock... quest.

If players lose their cannon after setting it up whether it be to logging out or having it decay from extended use, Nulodion will replace it for free. This includes the gold and royal versions. This can be done by right clicking and selecting the "Replace-cannon" option.

Retrieved from "https://runescape.fandom.com/wiki/Nulodion?oldid=24562227"
Community content is available under CC-BY-SA unless otherwise noted.