The Obelisk of Air is located in level 7 Wilderness, and can be reached by climbing the ladder north of the black demons in Edgeville Dungeon. It is used for charging an unpowered orb into an air orb using Charge Air Orb (requires level 66 Magic, 30 air runes or staff of air and 3 cosmic runes), which gives 76 Magic experience. At level 66 Crafting, an air orb can be attached to a battlestaff to make an air battlestaff, granting 137.5 Crafting experience.

As the Obelisk of Air is in the Wilderness, extreme caution should be taken when visiting it, as player killing happens in the Wilderness, and an unprepared charger can end up losing their orbs. Bringing teleport items such as an amulet of glory or runes may be wise, although one still has to be careful, since players with a high Magic level may teleblock you.

Charging air orbs is a good way of making money while training Magic; earning up to 1,838,725 coins and 36,000 experience an hour.

The most efficient way of enchanting large numbers of air orbs is to run to the obelisk from Edgeville bank and teleport back using a charged amulet of glory, allowing fast banking and thus faster training.

Charging an air orb is a requirement for Hard Wilderness Tasks.

The Obelisk of Air area is a PvP zone after the return of free trade and the old Wilderness.[1]

Once the Hard Wilderness Tasks have been completed, players may climb up and down the rocks on the southern side of the platform instead of going through the Edgeville Dungeon. 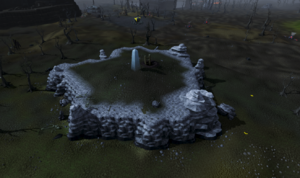 Retrieved from "https://runescape.fandom.com/wiki/Obelisk_of_Air?oldid=21613874"
Community content is available under CC-BY-SA unless otherwise noted.