This cat's a real momma's boy. 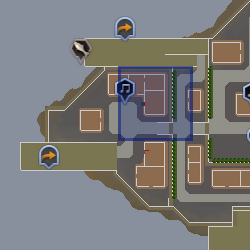 Oedipuss is a cat who lives in the western part of the Port district in Menaphos. He is listed in the Menaphos journal and must be found as part of the Cats of Menaphos activity. He is found in a locked room in an L-shaped building just south-east of the fishing spot on the north-western docks. When the player tries to open the door, they get the following message: "It appears to be locked. Perhaps the owner will be more careless another day". Opening the door requires tier 5 Port district reputation.

Oedipuss gives additional dialogue if the player is wearing a catspeak amulet or a cramulet. He will ask the player if they are looking for his mother and informs them that she is not in.

Before being found and petted
Loves the sea view.

After being found and petted
Loves the sea view, and loves his mummy.