Start a Wiki
For this item's main hand variant, see attuned crystal chakram.
For other variants of this item, see non-attuned.

A throwing disc fashioned from crystal.

A throwing disc fashioned from crystal. 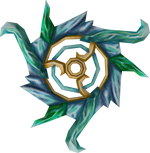 The off-hand attuned crystal chakram is a better version of the off-hand crystal chakram that requires 80 Ranged and 50 Agility to equip. It is made by Crystal Singing at the crystal bowl in the Ithell Clan district of Prifddinas, requiring 90 Smithing and completion of The Eyes of Glouphrie. This turns an attuned crystal weapon seed and 1000 harmonic dust into the attuned chakram, giving 1500 Smithing experience.

With this chakram (and another attuned weapon in your main hand slot), you have a small chance of doing 25% extra damage on a hit. This chance varies with your Agility level and maxes out at 12% at 99 Agility. So at most, this gives it a 3% damage boost over other level 80 Ranged equipment.

The off-hand attuned crystal chakram will revert to seed after 50,000 charges of combat, but uses two charges per hit except while within Prifddinas, where it uses one charge per hit. The amount of coins needed to repair a partially degraded off-hand attuned chakram is scaled linearly to your current creation cost of a normal crystal weapon/armour seed. This reduces with each creation, starting at 1,000,000 coins, and decreasing by 200,000 with each creation, until five or more creations - where a creation/full repair will costing 200,000 coins. However, the off-hand attuned chakram cannot be repaired for coins if it is fully degraded, as it reverts to seed and has to be re-created with harmonic dust.

This weapon can be stored using a keepsake key, but only when newly made/repaired - used versions will need to be repaired first.

Retrieved from "https://runescape.fandom.com/wiki/Off-hand_attuned_crystal_chakram?oldid=24552629"
Community content is available under CC-BY-SA unless otherwise noted.