Olaf's Quest is a quest about the unfortunate Fremennik Olaf Hradson, whose boat has crashed, rendering him unable to find his grandfather's treasure. You must help him find it and make sure his family do not find out about his failure.

Poor Olaf Hradson. He has to live up to such expectations. His ancestors sailed all over the world, and now he has to go out and prove himself their equal. If only he could read a map... If only he could sail... If only he hadn't crashed! Can you help a depressed and soggy Fremennik regain his pride, and possibly the lost treasure of his grandfather?

Talk to Olaf Hradson, who is north-east of Rellekka at the eastern rock crab spot, and he will tell you about his attempt to live up to his family's reputation by becoming an expert explorer. Although he failed miserably, he wants to liven up his family's spirits and asks you to deliver some special carvings to them. Unfortunately, he only has damp wood on him, so he directs you to the windswept tree up the mountain path to the east, from which you could obtain some dry wood.

Go up the hill and cut the windswept tree with any axe to get windswept logs. If snowflakes are falling at your screen, you're on the right path. Once you bring the logs back, Olaf will make a bowl for you to take to his wife and a plank to give his son back in Rellekka.

Olaf Hradson's wife, Ingrid Hradson, is found wandering around the well, just south-east of the long hall in Rellekka. After you give her the bowl, Ingrid will give you a loaf of bread in return for your troubles.

Olaf's son, Volf Olafson, is further north by the helmet shop. After you tell him that his father has sent him a gift from a far-away exotic land, he exchanges the plank for a cooked shark.

Go back to Olaf Hradson and you notice that the fire that he had made to keep himself warm, has burned out and he is shivering in the cold. Talk to him and he will hand you some damp wood and request you to light a fire. Use the damp planks and a tinderbox on the firepit and talk to him again.

After deciding whether or not to give him the food (he will only take the first piece of food in your inventory), he will give you Sven's last map. The X on the map is coincidentally right next to the windswept tree that you visited earlier.

Now is the time to get your armour and supplies to deal with a level 49 monster. Pick up the spade right next to Olaf. Dig beside the windswept tree and prepare to fall into the Brine Rat Cavern. Keep your spade, because if you fall off the bridge below, you will need it to get back in here.

Head east through the cave. After coming across a fork in the path, take the east path. Make sure to kill a skeleton fremennik along the way, and obtain a key.

Continue along the east path to a wall. The picture wall requires a puzzle to be solved in order to unlock. The puzzle is quite simple: rotate the pieces to create a skull. The four levers each control two bone pieces.

When finished, "pull" the "confirm" lever on the bottom-right. If the skull is not in the right position when clicking "confirm", a rock will swing out of the wall, causing 30 damage. You do not need to re-solve the puzzle if you exit the dungeon from this point onward.

After crossing into the larger room to the north, you will find some rope, rotten barrels, and several skeleton fremennik.

Take 2 barrels and 6 ropes from the piles around the room. With these supplies, head to the northeast corner of the room, where there will be a rickety-looking bridge. Before stepping on the bridge it is highly recommended to take a dose of Agility potion to decrease the chances of falling. You have to turn off run before trying to cross the bridge, otherwise a message will appear in your message box stating "You can't run on this walkway - it's far, far too slippery." and you may fall. Wearing weight-reducing equipment and removing any weapons or shields can help.

Use a barrel on the empty parts of the walkway to get across. Repeat this step on the next empty spot. Failure results in being swept away a bit north of Olaf, above ground. This can be a very frustrating exercise for players without a high Agility level. Move one spot at a time to help avoid falling off. If you fail to cross the bridge after you repair it, you will not need to repair it again. The Surge or Escape abilities cannot be used here.

The gate in the middle of the walkway has a lock — it must be matched with the key handle you obtained from killing the skeleton, as there will be 6 different types of key handles. Click on the correct shape to open the door — the key will disappear. A skeleton fremennik can be killed to receive another key if necessary.

If you fall off after you unlock the door, you must get another key, as the door won't stay unlocked.

To commence the fight, attempt to open the chest in the middle of the old longboat-wreck. A level 49 skeleton fremennik named Ulfric will appear. He uses melee, so Protect from Melee is highly effective in order to block most of Ulfric's attacks; alternatively use the safe spot at the grave where he appears to range or mage him. There are also some good spots to use a halberd successfully. His low hitting and inaccurate attacks make this an easy boss fight.

Ulfric will teleport if you end up on one side of the longboat wreck with him on the other side. He will yell "No escape, outlander!" when he teleports.

After killing Ulfric, open the chest again with 5 empty inventory slots, and the quest will be completed. 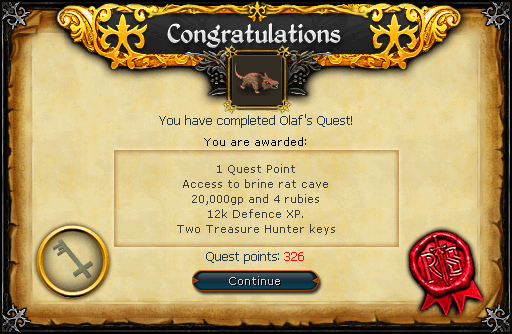