Start a Wiki
OS
This article is about the treasure hunter NPC. For the bard in Rellekka, see Olaf the Bard. 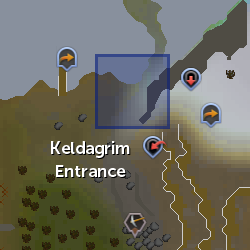 Olaf Hradson is a Fremennik treasure hunter and the grandson of Sven the Helmsman. He obtained a map drawn by his grandfather and set off to find the lost treasure. However, as he set sail during a storm, his boat was wrecked and he washed up back on shore. He decided against trying to find hidden riches again but couldn't return home as he did not wish his wife Ingrid Hradson and son Volf Olafson to know of his failure, instead remaining by the wreck of his boat.

Eventually, an adventurer found him and agreed to help him fake his success to his family. As thanks, he gave them his grandfather's map, but warned them that it was cursed.

Retrieved from "https://runescape.fandom.com/wiki/Olaf_Hradson?oldid=24562290"
Community content is available under CC-BY-SA unless otherwise noted.