East of the Slayer Tower 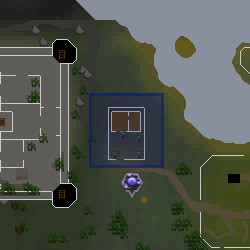 The old crone can be found in the house east of the Slayer Tower.

She has a central role in Ghosts Ahoy, and a minor role in Animal Magnetism.

She was once a resident of Port Phasmatys and was a friend of Velorina. She spoke out against Necrovarus and fled before he took power.

During both quests, she will modify a player's ghostspeak amulet in ways that are required to complete the quests successfully.

After the Swept Away quest, players who talk to her with the broomstick in their inventory receive 7,139 Magic exp. Maggie knows of the Crone's mystical abilities and whereabouts, hinting the two may have known each other in the past. Furthermore, when a player asks The Old Crone to enchant their broom, she says: "I suppose I could, just this once, for old times' sake." This may be another suggestion that Maggie and The Old Crone know each other.

Players can reach her via the following ways:

Retrieved from "https://runescape.fandom.com/wiki/Old_crone?oldid=24563079"
Community content is available under CC-BY-SA unless otherwise noted.