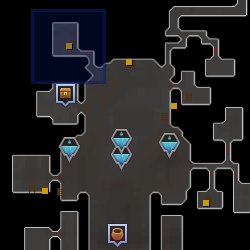 Oldak is the greatest inventor of the Dorgeshuun, an advanced tribe of cave goblins. He spends most of his time in his lab at the bottom floor in his house in north-western Dorgesh-Kaan, just north of the bank.

Oldak is known for his excellent magical skills, a trait uncommon amongst the cave goblins. He seems to view magic somewhat like a scientist; his home is filled with strange metal instruments and littered with cables. Only after Dorgesh-Kaan's opening was he able to do much; the lack of available runes in the hidden city made things difficult.

Players with 40 Invention can speak with him to start with the Cave goblin tech tree. There is an Inventor's workbench in his lab.

Oldak will make players moving-over-distance spheres, if provided with un-noted molten glass and two law runes. He then proceeds to coat the molten glass in the crushed law runes, and when the glass is hardened, the orb has magical properties. When broken, the orbs will teleport players to one of several random areas in Dorgesh-Kaan.

During Another Slice of H.A.M., he will also make players goblin village spheres. After the quest is complete, he will make players these spheres in the same way as Dorgesh-Kaan spheres.

During and after the Land of the Goblins quest, a plain of mud sphere can transport players to the Goblin Cave located south-east of the Fishing Guild.

After The Chosen Commander quest, Oldak will create bandos throne room spheres that teleport players to the Bandos's throne room accessed during the quest. The throne room offers an Agility course and several attackable statues.

Also, if a player inquires about the magic he has discovered, the cave goblin will explain some of his more recent discoveries, which will temporarily raise, or lower the player's Magic or Runecrafting skill by up to two levels.

Talk to Oldak. Ask, "What have you discovered?" You will get a different response depending on what skill is affected.

Runecrafting boost - Oldak lectures you on the construction of runes and you find yourself thinking about Runecrafting with greater clarity.

Magic boost - Oldak lectures you on the magic energies stored within runes and you find yourself thinking about Magic with greater clarity.

This is not possible during Land of the Goblins while the player is supposed to rescue Zanik to ask about that.

On the top floor of his house is a chest which can be opened with a lockpick if a player has a Thieving level of 52. The chest can be opened once every 3–5 minutes, and the loot obtainable from it is different from the loot of the other chests around the city.

Retrieved from "https://runescape.fandom.com/wiki/Oldak?oldid=24562264"
Community content is available under CC-BY-SA unless otherwise noted.