You will have to speak to Wizard Elriss to get another omni-talisman.

A staff with a talisman on top. 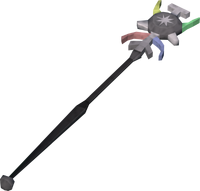 The staff is used in the Runecrafting skill. It is similar to an omni-tiara in purpose, as it can be equipped, allowing players to left click on runecrafting altars to enter them and save an inventory space when crafting runes through not having to carry a talisman to access altars. This can be helpful for players with a Master runecrafter hat, saving an inventory space instead of carrying a talisman or tiara/wicked hood while reaping the bonus experience benefits. Jagex have also said that the staff can also be used for "distracting the eyes in the Abyss to help you sneak past". It cannot be used as a substitute for runes when casting Magic spells.

Unlike the law talisman staff, the omni-talisman staff cannot be taken to Entrana and used to enter the law altar as it has combat bonuses and is considered a weapon by the monks of entrana. If a player dies, this staff will not appear at their gravestone.

Retrieved from "https://runescape.fandom.com/wiki/Omni-talisman_staff?oldid=24540376"
Community content is available under CC-BY-SA unless otherwise noted.