One Piercing Note is a novice quest which continues from the legend described in the story of The Song From Before The War. The theme of the quest is that of a murder mystery, specifically uncovering the motives of the murder. The quest was the first to be fully voiced and contains an extensive amount of audio.

There has been a murder in the Abbey of Saint Elspeth, and the abbess wants an adventurer to investigate. Can you find the mysterious killer without disturbing the sisters' lives of prayer and sacred music?

Head east from Al Kharid, through the gate beside of Ranael's Super Skirt Store, past the Desert strykewyrms, to the Citharede Abbey. A strykewyrm hunter will speak to you before you can enter and tell you about the Abbey of Saint Elspeth. As you enter the Abbey, you will hear a group of troubadours singing, and see one of the sisters waiting for you. Speak to Sister Catherina, who will tell you that Abbess Benita has asked her to wait for an adventurer to arrive, although she doesn't know why. She will tell you to immediately head for Benita's office, which is in the north-west of the Abbey.

Abbess Benita wants you to investigate the murder of one of their sisters, which she had not yet told the others about. She says that the last time she saw Sister Anna was at Vespers the day before, and found her body when she didn't turn up for Compline. She hands over a key to Sister Anna's cell, so that her private room can be investigated. She also wants Sister Anna's body to be inspected, and for the people around the abbey to be questioned. Abbess Benita will also request to be subtle in their investigations as she doesn't want the murder to be known. She will give you a notebook to keep track of progress with the investigation. This can be useful if missing a clue, since lines of investigation are crossed out if all the clues involved with them are found. 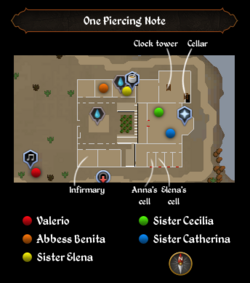 Sister Anna's cell is in the south-east corner of the Abbey with the rest of the cells. Read the doors to find the correct one and open it with the key. Here, inspect the bed to find a cloth fragment, and the window to reveal it was broken from inside. In the north western part of the Abbey is the applicants room, in which you will find another cloth fragment on the bed.

Sister Anna's body is in the infirmary, in the south-west corner of the Abbey. The abbess prepared it for burial herself and forbade the other sisters from seeing it. Investigate the body simply by clicking on the bed covered with grey blanket. The information about Sister Anna's body and her wounds will be revealed. The body will give up to four clues.

A total of five people found in and around the monastery will need to be questioned. The order in which you speak to them does not matter. When you have spoken to the suspects correctly, you will be notified that you have gathered clues that will appear in the chat box in red text. Make sure you get all the clues to continue.

All of the questions must be asked of each suspect.

Valerio and sister Catherina both ask you why are you asking such questions. Telling them the truth or following Abbess Benita's orders won't change the outcome of the quest.

Run through all the options when speaking to each suspect, to avoid missing the clues, resulting in failing to continue the quest.

Sister Debora (called feet when first encountered), who can be found upstairs in the clock tower in the north-east corner, confuses the adventurer with Sister Catherina and asks for help with setting up the correct time on the clock. She says how the clock is incorrect, which can be fixed by rotating the hands. Set them to the 12 o'clock position. As soon as it is fixed she will come out of the clock and you may now question her.

Return to Abbess Benita and say that you are finished. If clues are missing, she will say how many have yet to be found. Once all the clues are found, say who you think is the killer. The option chosen doesn't matter since the result will be the same. A cut-scene occurs and a scream will be heard.

Follow the sound of the scream to the cellar. The door to the kitchen has been blocked, so players will need to go via the chapel to get there. Go down the stairs, and you'll find Sister Elena's corpse, along with Sister Cecilia panicking. Abbess Benita will then say that she cannot hide this any longer, and will ask for you to find the clues.

First, investigate the bloodstains and the body. Do not search the reliquary (providing that it is open). If you choose yes and are not wearing anything Saradomin related, you will get hit for your current life points minus one.

Once all the clues related to Sister Elena's murder are found, return to Benita to submit what you have found and she will ask who killed Sister Elena. Again, the option chosen does not matter. She then asks the adventurer to bring Sister Catherina back inside for her own safety.

Go outside and talk to Sister Catherina, who is dancing with the troubadours. You must dance with her before asking her to come back into the abbey. Once you have, pick the first option to take her back inside (will not work if you have not found all previous clues). She agrees to go back in, but another cut-scene occurs. As the player passes through the gateway, the gate comes down and Sister Catherina is locked outside. The player may only watch as "The Ripper" jumps down and murders Sister Catherina in cold blood. Valerio rushes to try to save her, interrupting the masked killer, but is too late.

Climb the ladder to the south of the portcullis and operate the winch to open it. Investigate the body or talk to Valerio. Abbess Benita also appears, and after a brief conversation. Walk to Abbess Benita's office.

In the office, again, choose an option for who you think is the murderer, but it again does not matter. In further conversation, suggest making a trap to catch the masked killer. Suggest a new victim/target as a bait for the masked killer. Then you need to choose "They were all associated with Valerio".

After the conversation, pick up a cabbage from the small field and then head downstairs to the cellar. Move the nearby candelabrum or tri-candle stand next to the Reliquary. The candelabrum can be difficult to see in low detail. Taking care to not accidentally select eat, put the cabbage on it. More could be picked from the centre of the Abbey. Search the robe cabinet for a set of Citharede robes, put them on the candelabrum to finish off Sister Cabbage and hide in the cabinet.

Another cut-scene will play where The Killer arrives and attacks the dummy. Exit the cabinet and try to knock the killer out. However, the killer is not knocked out and runs away up the stairs. Chase it around the abbey. Small cut-scenes will play to show where the masked killer is running.

It heads to the kitchen, then outside to the gate which is closed. Two of Valerio's group block the gate, making the ripper run to the prayer area. The sisters don't notice, however, and the masked killer runs up to the clock tower.

Once at the clock tower, the masked killer takes Sister Debora as a hostage and it is revealed that the masked killer was Sister Anna herself. You cannot fight her, however, only have a conversation with her. She believes she is the Spirit of Saint Elspeth and that Saradomin wished the dancers, the singers, and the musicians to die. She explains that she killed all the sisters in cold blood because of their lust to dance, which she finds evil in her possessed mind. She killed the abbey applicant, Isabella, and dressed her in abbey robes to look like Sister Anna's body.

There is no way to convince her to release Sister Debora and surrender. To stop her, go down one floor and operate the clock mechanism, setting the time to twelve o'clock, where the both hands hits the topmost notch. Contrary to most clocks the thin hand is the hour hand and the thick hand is the minute hand.

After the cut-scene you are returned to Abbess Benita's office, where you have two choices:

You can either reveal Sister Anna as the true culprit, much to the horror of the Abbess and Valerio, who will indicate that both her resignation and the possible disintegration of the order may result. The second choice is to reveal that the ripper demon who possessed her as the offender.

Regardless of your choice, Abbess Benita will thank and reward you.

Quest completed!
The unique music that plays on completion of this quest. 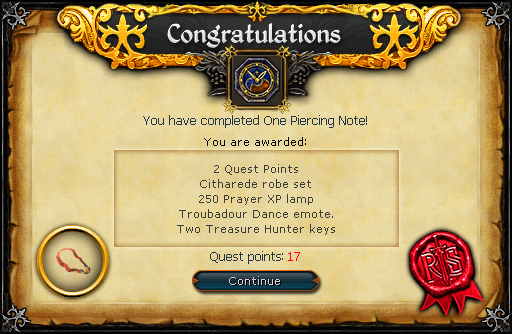 In the lead-up to the quest, the Lore The Song From Before The War was released, containing hints about the quest and the lore attached to it. A One Piercing Note developer's blog was also released days after.

The location of the quest was revealed at RuneFest, and the desert was altered in an update a week before release to make room for the Abbey.

The Abbey of Elspeth Citharede as seen in Behind the Scenes November, 2011

A pre-release image hint for One Piercing Note from the official RuneScape website's media page.

The oratory as seen in the Developer's Blog

An outside view of the abbey, as seen in the Developer's Blog 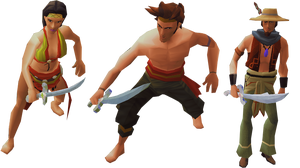 Retrieved from "https://runescape.fandom.com/wiki/One_Piercing_Note?oldid=23276071"
Community content is available under CC-BY-SA unless otherwise noted.