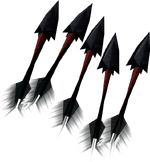 Enchanted onyx bakriminel bolts have a 10% chance of triggering the Life Leech effect, which deals 25% more damage to the targets, and heals the player for 25% of the damage potential of the attack, capping at 2,500 life points. The healing is calculated before the damage buff occurs and is based on the original damage potential of the attack (e.g. a hit with a potential damage of 1000 damage can deal up to 1250 damage if the effect triggers but will always heal 250 and not 313).

Onslaught can trigger the effect, increasing that hit by 25% and healing for 25% of the pre-trigger damage dealt, the recoil is also calculated on the pre-trigger damage. The recoil and healing appear to be calculated at the same moment resulting the damage dealt to the player being equal to the recoil minus the healing. This effectively negates any recoil damage before the 11th hit if the effect triggers. E.g. a 12th hit that would have dealt 10000 damage but triggers the effect instead deals 12500 damage and heals for 2500 but also recoils for 4500 resulting in 2000 damage dealt to the player.

Sacrifice can trigger the effect and will heal according to the increased damage of the ability.

The amount of healing is increased by Prayers and normal equipment damage bonuses but not by Void Knight equipment and Needle Strike's buff. The amount of damage dealt by the effect takes all of the above into consideration.

The chance of the special attack occurring is increased to 12% upon the completion of the elite Seers' Village achievements.

Retrieved from "https://runescape.fandom.com/wiki/Onyx_bakriminel_bolts_(e)?oldid=24561087"
Community content is available under CC-BY-SA unless otherwise noted.