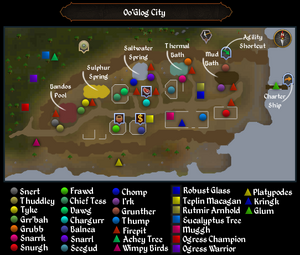 Oo'glog is an Ogress city and spa that plays an important part in the As a First Resort... quest. The bank and shops are not available until starting the quest, and the spas, which are the main attraction of the city, are a reward after completing the quest.

The eucalyptus trees found in the area surrounding Oo'glog are not overly dissimilar to the eucalypts found throughout Australasia.

Oo'glog lies just south of the Feldip Hunter area, a popular destination for hunters and explorers alike. Reaching the city on foot is generally not an easy matter, unless you have 1 law rune, 1 air rune, 1 water rune, and level 10 Magic to teleport to Mobilising Armies then just simply walk east for about 30 seconds; the most common travel hub near Oo'glog is Yanille, which lies beyond the ogre capital of Gu'tanoth, the dangerous Feldip Hills, and the jungle itself. The sea borders the eastern edge of Oo'glog and the jungle to the west, while the area to the south is, as of yet, inaccessible.

Fortunately, more experienced players may utilise a number of methods to speed up travel to the area. Those that have reached a certain point in A Fairy Tale Part II may use the fairy ring coordinates AKS to reach the southernmost area of the Feldip Hills. A Gnome glider may also be used by those that have completed One Small Favour to reach the rim of the jungle.

The Ogre Boat Ride can also be used upon reaching a certain point in Recipe for Disaster, and the Eagle transport system can be used to reach the jungle hunter area. Players with 29 Agility may also use the shortcut above the Mud bath to avoid the various aggressive creatures near the west entrance.

A very quick way for players with 57 Summoning is using a Spirit Larupia to teleport to the Feldip Hills hunter area just north of Oo'glog.

Another fast method is to use a Spirit tree, a Ring of duelling, or the Mobilising Armies Teleport in the regular spellbook to teleport to Mobilising Armies Command centre and run to Oo'glog from there. There are many medium-level monsters between the centre and Oo'glog, but Protect from Melee can be used to avoid all damage with prayer points then being recharged at the spa's sulphur spring.

With the update lodestones, the new fastest way to get to Oo'glog is to just unlock the lodestone.

There are several spas or baths in Oo'glog. From west to east, these are:

There is a bank in the central area of the city. The bank is rarely used due to the fact that the Mobilising Armies bank is much more easily accessible, as it doesn't have a quest requirement and is much quicker to access through the duelling ring or spirit tree teleport. However, many players may still store items gained from Hunting due to the nearby hunting grounds, therefore making it an alternative to banks at Yanille or Castle Wars. The bank is usable just after starting the As a First Resort... quest.

Balnea and 2 Ogress bankers are found in the bank. See Balnea's article for dialogue before the quest is started.

There are three shops in Oo'glog. The shops are usable just after completing the As a First Resort... quest.

The owner of the shop, Chargurr sells both cooked and raw meat.

This shop is widely known to sell raw bird meat which is necessary to produce a Spirit Terrorbird pouch.

There is a salon where players may speak to Kringk for an ogre wig which costs 50 coins, or get a "facial" from Muggh (actually a lump of mud applied to your face that occupies the helmet slot). The facial looks like a large hand print over your face, and crumbles away when removed.

There are eucalyptus and achey trees to the west of the city. Travel north of the west entrance of the city to reach the area. This area is the only area so far in RuneScape to have eucalyptus trees.

Though not within Oo'glog, a red sandstone rock is just north of Oo'glog. This is located northeast of the thermal spa and northwest of both the mud bath and the level 29 agility shortcut (rock passage). To mine it, you need level 81 Mining (you do not need to do the As a First Resort... quest in order to mine red sandstone). Mining red sandstone yields 70 mining XP per rock. Only 50 red sandstone can be mined per day. More red sandstone can be obtained by mining the Shooting Star and talking to the Star sprite, using the resourceful aura or by using the juju mining potion.

A potion flask is a container that can hold 6 doses of a potion, two more than a vial. These are made from robust glass, which can only be made in Oo'glog after As a First Resort.... One can mine red sandstone just north of Oo'glog. Robust glass is made by melting red sandstone in a robust glass machine, which can be accessed after the As a First Resort.... quest. Making robust glass has no Crafting requirement and does not grant Crafting experience. Making potion flasks has a Crafting requirement of 89 (boostable; but does not work with the assist system) and grants 100 Crafting experience per flask.

Near the west entrance of the city these creatures can be hunted:

Note: Only baby platypodes can be caught.

Retrieved from "https://runescape.fandom.com/wiki/Oo%27glog?oldid=10644135"
Community content is available under CC-BY-SA unless otherwise noted.