A mystical fount of knowledge. 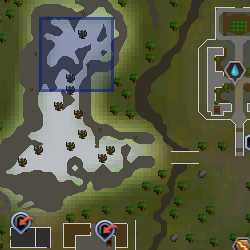 The Oracle is a strange woman who lives atop Ice Mountain. She is involved in medium clue scrolls (the answer to the challenge scroll is 48). She is an important figure in the Dragon Slayer quest, as she provides a clue as to how to access one of the map pieces. She is also involved in Perils of Ice Mountain, where she foretells of a day when the Kharidian desert will reach Varrock and Falador if the player does not repair the environmental damage caused by the Dwarven Power Station. During that quest, the tent in which she lives is damaged in an avalanche, though it is repaired by the player. Occasionally, she will be visited by Postie Pete and, after completion of The Chosen Commander, Zanik as well. One of the Wise Old Man's tasks involves taking a message to her.

Players doing Treasure Trails clues are sometimes directed to her with the anagram 'Are Col' and are given a challenge scroll. The answer is 48.

According to a posting by Andrew in June 1999 (one of the first references to his RPG):

When spoken to, she says a wide variety of one-liners. These range from bizarre advice to warnings and hints. She spoke of the Stone of Jas long before While Guthix Sleeps or even Meeting History, where the stone is first seen. She even makes references to the dragonkin and Juna, as well as comical phrases such as, "if a tree falls in a forest and nobody is there, nobody gets woodcutting xp."